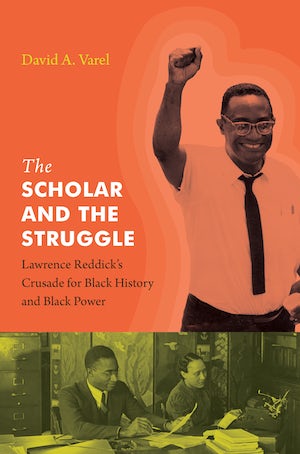 A question of honor makes history

New Books Network: The Scholar and the Struggle

Black Perspectives' list of The Best Black History Books of 2020

Lawrence Reddick (1910–1995) was among the most notable African American intellectuals of his generation. The second curator of the Schomburg Library and a University of Chicago PhD, Reddick helped spearhead Carter Woodson's black history movement in the 1930s, guide the Double Victory campaign during World War II, lead the Southern Christian Leadership Conference during the Cold War, mentor Martin Luther King Jr. throughout his entire public life, direct the Opportunities Industrialization Center Institute during the 1960s, and forcefully confront institutional racism within academia during the Black Power era. A lifelong Pan-Africanist, Reddick also fought for decolonization and black self-determination alongside Kwame Nkrumah, Nnamdi Azikiwe, Léopold Senghor, and W. E. B. Du Bois. Beyond participating in such struggles, Reddick documented and interpreted them for black and white publics alike.

In The Scholar and the Struggle, David A. Varel tells Reddick's compelling story. His biography reveals the many essential but underappreciated roles played by intellectuals in the black freedom struggle and connects the past to the present in powerful, unforgettable ways.

David A. Varel is an affiliate faculty member at Metropolitan State University–Denver, and author of The Lost Black Scholar: Resurrecting Allison Davis in American Social Thought.
For more information about David A. Varel, visit the Author Page.

"Lawrence Reddick serves as a lens into the complexities of the Black freedom struggle during the twentieth century. It would be a disservice to pin Reddick down as merely a “civil rights” or “black nationalist” advocate—instead, like so many others before and since, Reddick had feet planted firmly in both broad ideological camps. In short, Reddick fought for Black freedom, and a space for Black people to have within the broader world of arts and letters. Varel’s book does not let us forget that. We should all be thankful for such a work as The Scholar and the Struggle."--Society for U.S. Intellectual History

"An exceedingly important intervention. Varel's work will complement and extend, as well as play an integral part in, the expansion of African American intellectual history and historiography."--Stephen G. Hall, author of A Faithful Account of the Race: African American Historical Writing in Nineteenth-Century America

"This accessible biography reveals the broad scope of Lawrence Reddick’s activism--from local movements to the national black freedom struggle to Pan-African activities. In clear, easy-to-follow prose, it depicts a dynamic career ranging from the 1930s to the 1970s that intersects with a remarkable array of major events, figures, and themes within the vast landscape of the black experience in the United States."--Pero Dagbovie, author of Reclaiming the Black Past: The Use and Misuse of African American History in the Twenty-First Century

"The enterprise of African American history is built on a wealth of evidence and documentation that did not come into being spontaneously. How archives were created and organized, libraries stocked, documents organized and made available to scholars and to the public--the gathering and dissemination of history’s raw material--is not a self-evident process. Nor is it, so far as it pertains to African American history, a given when one considers the institutional biases of the nation’s largest archives. Among the people we must thank for their acumen and enterprise in this field is the archivist, librarian, and historian Lawrence Reddick, whose commitment to scholarship and placing African American history in service to the struggle was long lasting and nonpareil. And for bringing Reddick’s life to our attention with incisiveness and grace, we have David Varel to thank."--Kenneth Robert Janken, author of Walter White: Mr. NAACP and The Wilmington Ten: Violence, Injustice, and the Rise of Black Politics in the 1970s