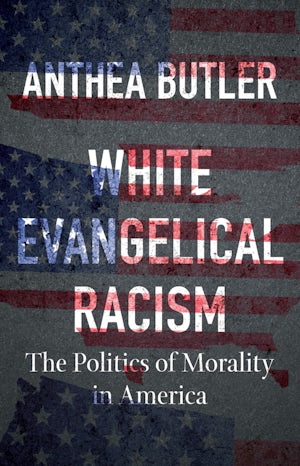 The American political scene today is poisonously divided, and the vast majority of white evangelicals play a strikingly unified, powerful role in the disunion. These evangelicals raise a starkly consequential question for electoral politics: Why do they claim morality while supporting politicians who act immorally by most Christian measures? In this clear-eyed, hard-hitting chronicle of American religion and politics, Anthea Butler answers that racism is at the core of conservative evangelical activism and power.

Butler reveals how evangelical racism, propelled by the benefits of whiteness, has since the nation’s founding played a provocative role in severely fracturing the electorate. During the buildup to the Civil War, white evangelicals used scripture to defend slavery and nurture the Confederacy. During Reconstruction, they used it to deny the vote to newly emancipated blacks. In the twentieth century, they sided with segregationists in avidly opposing movements for racial equality and civil rights. Most recently, evangelicals supported the Tea Party, a Muslim ban, and border policies allowing family separation. White evangelicals today, cloaked in a vision of Christian patriarchy and nationhood, form a staunch voting bloc in support of white leadership. Evangelicalism’s racial history festers, splits America, and needs a reckoning now.

Anthea Butler is professor of religion at the University of Pennsylvania and the author of Women in the Church of God in Christ: Making a Sanctified World. A leading historian and public commentator on religion and politics, Butler has appeared on networks including CNN, BBC, and MSNBC and has published opinion pieces in the New York Times, the Washington Post, and many other media outlets.
For more information about Anthea Butler, visit the Author Page.

“Show[s] how evangelicals’ contemporary embrace of right-wing politics is rooted in its centuries-long problem with race. This scathing takedown of evangelicalism’s ‘racism problem’ will challenge evangelicals to confront and reject racism within church communities.”--Publishers Weekly

"[Butler's] ability to weave together history, personal experience, and contemporary reflection in such a cohesive and approachable manner makes White Evangelical Racism stand out. . . . By critiquing and unequivocally condemning White evangelical racism while also acknowledging another evangelical lineage, Butler presents masterful critique while still providing space for a much-needed nuance often missed when speaking about the tradition in America as a whole."--The Christian Century

"By placing before us a truer narrative of where we are, even as policies of voter suppression are undertaken by self-described Christians in elected office across the country, Anthea Butler has given us a gift of discernment."--Chapter 16

"Dr. Anthea Butler offers a succinct and compelling analysis of evangelicalism’s racist roots. While some have argued that evangelical racism began in the Trump era, and have loudly cried, 'Not all evangelicals!' Butler gives ample evidence that racism has always been a cornerstone of evangelicalism. . . . Butler’s invitation to look, to see, and most importantly to change, is one that we must accept."--Englewood Review of Books

"Butler’s work can be the beginning of a deep dive into the subject but it can also be read by anyone who wants to see below the surface tension of Black Lives Matter for example. Racism can be and is individual. It is also deftly institutional. You won’t hear the words 'color blind' the same way again after reading Butler’s timely volume. I highly recommend it."--By Common Consent