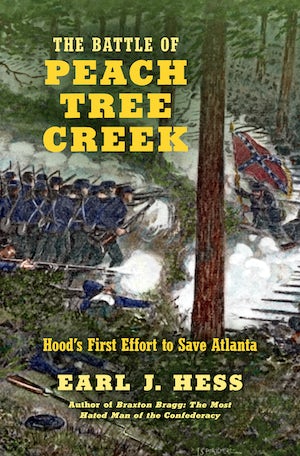 On July 20, 1864, the Civil War struggle for Atlanta reached a pivotal moment. As William T. Sherman’s Union forces came ever nearer the city, the defending Confederate Army of Tennessee replaced its commanding general, removing Joseph E. Johnston and elevating John Bell Hood. This decision stunned and demoralized Confederate troops just when Hood was compelled to take the offensive against the approaching Federals. Attacking northward from Atlanta’s defenses, Hood’s men struck George H. Thomas’s Army of the Cumberland just after it crossed Peach Tree Creek on July 20. Initially taken by surprise, the Federals fought back with spirit and nullified all the advantages the Confederates first enjoyed. As a result, the Federals achieved a remarkable defensive victory.

Offering new and definitive interpretations of the battle’s place within the Atlanta campaign, Earl J. Hess describes how several Confederate regiments and brigades made a pretense of advancing but then stopped partway to the objective and took cover for the rest of the afternoon on July 20. Hess shows that morale played an unusually important role in determining the outcome at Peach Tree Creek--a soured mood among the Confederates and overwhelming confidence among the Federals spelled disaster for one side and victory for the other.

Award-winning historian Earl J. Hess is author of many books on Civil War history, including Braxton Bragg: The Most Hated Man of the Confederacy.
For more information about Earl J. Hess, visit the Author Page.

“Should be regarded as the new standard history of John Bell Hood’s first battle as defender of Atlanta.”--Civil War Books and Authors

"An exquisitely detailed case study of one of the Confederacy's worst military disasters. Highly recommended for Civil War and military historians, subject enthusiasts, and all libraries."--Library Journal starred review

“Hess carefully evaluates all the factors that separated victory from defeat.”--Civil War Times

“For Civil War readers, students of the Atlanta campaign, and fans of Earl J. Hess, this is a must-read.”--The Journal of America’s Military Past

“Hess’s description of the battle is solid and immensely detailed, down to the regimental level. He has mined seemingly every available primary source. Readers also will appreciate his wise nuance in matters that often elicit only blanket generalizations.”--The Journal of American History