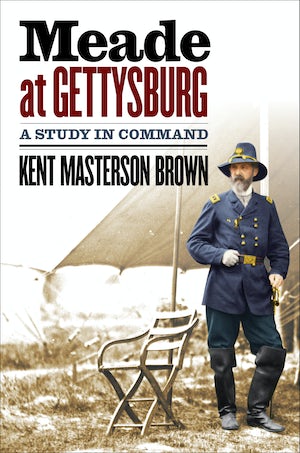 Although he took command of the Army of the Potomac only three days before the first shots were fired at Gettysburg, Union general George G. Meade guided his forces to victory in the Civil War's most pivotal battle. Commentators often dismiss Meade when discussing the great leaders of the Civil War. But in this long-anticipated book, Kent Masterson Brown draws on an expansive archive to reappraise Meade's leadership during the Battle of Gettysburg. Using Meade's published and unpublished papers alongside diaries, letters, and memoirs of fellow officers and enlisted men, Brown highlights how Meade's rapid advance of the army to Gettysburg on July 1, his tactical control and coordination of the army in the desperate fighting on July 2, and his determination to hold his positions on July 3 insured victory.

Brown argues that supply deficiencies, brought about by the army's unexpected need to advance to Gettysburg, were crippling. In spite of that, Meade pursued Lee's retreating army rapidly, and his decision not to blindly attack Lee's formidable defenses near Williamsport on July 13 was entirely correct in spite of subsequent harsh criticism. Combining compelling narrative with incisive analysis, this finely rendered work of military history deepens our understanding of the Army of the Potomac as well as the machinations of the Gettysburg Campaign, restoring Meade to his rightful place in the Gettysburg narrative.

Kent Masterson Brown is an award-winning writer, filmmaker, and attorney residing in Lexington, Kentucky. His previous books include Retreat from Gettysburg: Lee, Logistics, and the Pennsylvania Campaign.
For more information about Kent Masterson Brown, Esq., visit the Author Page.

“An instructive book about Civil War generalship that will engage and inform anyone interested in the dynamics of command from the perspective of those in charge.”—Library Journal

“In this meticulously researched new book, a Civil War expert presents a refreshingly complex view of the matter – and rises to Meade’s defense.”—Christian Science Monitor's Top 10 Books of June

“Brown’s book is the most thorough and authoritative study of Meade’s generalship to appear in a generation, edging out even John Gregory Selby’s excellent 2018 book “Meade: The Price of Command, 1863-1865” – but that command, at its moment of crisis, is still intensely up for debate.”—Steve Donoghue, Christian Science Monitor

“Meade at Gettysburg is an important contribution to Civil

War literature...Brown’s mastery of manuscript and published primary materials is immediately evident..His narrative recounts in astonishing granularity Meade’s command decisions and those of his principal subordinates across the course of the campaign.”—Civil War Book Review

"Attacked relentlessly by the press, considered a hopeless mediocrity within Lincoln’s administration, and rarely cheered by his soldiers, George Gordon Meade is today largely misunderstood or ignored, despite his magnificent triumph at Gettysburg. Kent Masterson Brown’s masterful book will change all that. In beautiful prose and compelling analysis, Brown puts the reader in the general's shoes as never before, revealing his crucial role in delivering Northerners an unparalleled victory in the pivotal summer of 1863."--Peter S. Carmichael, author of The War for the Common Soldier: How Men Thought, Fought, and Survived in Civil War Armies

"So effective were the efforts to marginalize George G. Meade’s role in the Union victory at Gettysburg that he grumbled to his wife on December 7, 1863, ‘I suppose after awhile it will be discovered I was not at Gettysburg at all.’ In this engaging and deeply researched study, Kent Masterson Brown firmly and convincingly restores Meade’s centrality to that victory. Meade at Gettysburg is a worthy and important addition to the battle’s vast literature."--D. Scott Hartwig, author of To Antietam Creek