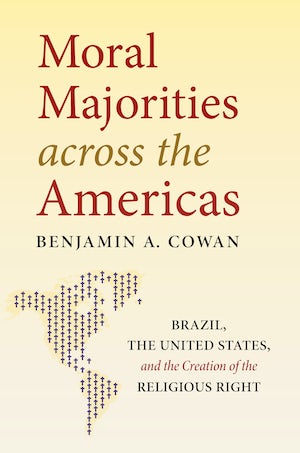 This new history of the Christian right does not stop at national or religious boundaries. Benjamin A. Cowan chronicles the advent of a hemispheric religious movement whose current power and influence make headlines and generate no small amount of shock in Brazil and the United States. These two countries, Cowan argues, played host to the principal activists and institutions who collaboratively fashioned the ascendant religious conservatism of the late twentieth century. Cowan not only unearths the deep historical connections between Brazilian and U.S. religious conservatives but also proves just how essential Brazilian thinkers, activists, and institutions were to engendering right-wing political power in the Americas.

Cowan shows that both Protestant and Catholic religious warriors began to commune in the 1930s around a passionate aversion to mainstream ecumenicalism and moderate political ideas. Brazilian intellectuals, politicians, religious leaders, and captains of industry worked with partners at home and in the United States to build a united right. Together, activists engaged in a series of reactionary theological discussions. Their transnational, transdenominational platform fostered a sense of common cause and allowed them to develop a series of strategies that pushed once marginal ideas to the center of public discourse, reshaped religious demographics, and effected a rightward shift in politics across two continents.

Benjamin A. Cowan is associate professor of history at the University of California, San Diego, and author of Securing Sex: Morality and Repression in the Making of Cold War Brazil.
For more information about Benjamin A. Cowan, visit the Author Page.

"[A] persuasive study of evangelical Protestant conservatism in the Western hemisphere. Focusing on the relationship between right-wing religious and political conservatives in the United States and Brazil, Cowan constructs a nuanced argument that religious and political conservatism in these two countries are deeply entwined and often work in concert. . . . This deeply researched, closely argued work will be a valuable contribution."--Publishers Weekly

“Cowan’s work is a major milestone in the recent history of the religious Right.” --CHOICE

“Much has been written about the religious right in U.S. contexts, as if it grew and operated in a vacuum. In this bold, pathbreaking, and beautifully written book, Benjamin Cowan not only maps out deep connections between American and Brazilian conservatives but also proves just how essential Brazilian thinkers, activists, and institutions were to making the right-wing surge in both countries possible. Cowan is a trendsetter who will force historians to cast a wider, global gaze when trying to make sense of populist religion's expansive political reach, both past and present.”—Darren Dochuk, author of Annointed with Oil: How Christianity and Crude Made Modern America

“Built on Herculean research, beautifully written, and meticulously argued, this book convincingly shows how adherents of the Brazilian religious right, prioritizing their opposition to communism and their unity around moral issues, not only supported the military dictatorship in Brazil throughout its twenty-one-year rule but also played a fundamental role in the development and consolidation of a powerful transnational conservative movement.”—James N. Green, author of We Cannot Remain Silent