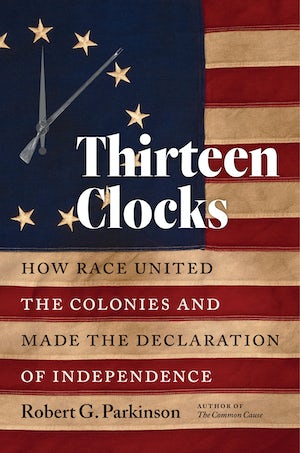 Professors Rave about Thirteen Clocks in the Classroom (download PDF)

In his celebrated account of the origins of American unity, John Adams described July 1776 as the moment when thirteen clocks managed to strike at the same time. So how did these American colonies overcome long odds to create a durable union capable of declaring independence from Britain? In this powerful new history of the fifteen tense months that culminated in the Declaration of Independence, Robert G. Parkinson provides a troubling answer: racial fear. Tracing the circulation of information in the colonial news systems that linked patriot leaders and average colonists, Parkinson reveals how the system’s participants constructed a compelling drama featuring virtuous men who suddenly found themselves threatened by ruthless Indians and defiant slaves acting on behalf of the king.

Parkinson argues that patriot leaders used racial prejudices to persuade Americans to declare independence. Between the Revolutionary War’s start at Lexington and the Declaration, they broadcast any news they could find about Native Americans, enslaved Blacks, and Hessian mercenaries working with their British enemies. American independence thus owed less to the love of liberty than to the exploitation of colonial fears about race. Thirteen Clocks offers an accessible history of the Revolution that uncovers the uncomfortable origins of the republic even as it speaks to our own moment.

“A knowledgeable, disturbing presentation of the prominent role of racism in the years of the nation’s birth. . . . Parkinson pulls no punches.” —Kirkus Reviews

“An accessible account that is highly recommended for those who want a historical perspective on current issues and those interested in the nation’s founding.”—Library Journal, starred review

“A wonderful achievement . . . superbly clear, approachable, and vivid. It is clearly a book of its moment, and as such it has an important place in our classrooms.” —H-Early-America

“With his stunning debut, The Common Cause, Parkinson established himself as one of the most astute historians of the Revolution. Drawing from that exhaustive research, he has written a brilliant history of events that culminated in the Declaration of Independence. Thirteen Clocks should be read by all who are interested in the origins of the American story.” —Annette Gordon-Reed, coauthor with Peter S. Onuf of Most Blessed of the Patriarchs: Thomas Jefferson and the Empire of the Imagination

“Are we ready for the American Revolution to join the rest of colonial, or indeed American, history? This is the most original work on 1776 in a generation. Parkinson explains the specifically political and national roots of American racism.” —David Waldstreicher, author of Runaway America: Benjamin Franklin, Slavery, and the American Revolution