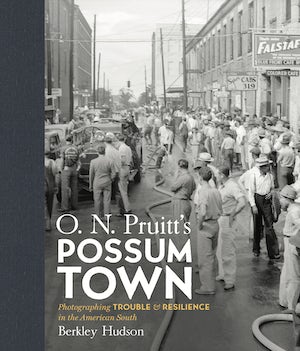 To purchase online via an independent bookstore, visit Bookshop.org
Photographer O. N. Pruitt (1891–1967) was for some forty years the de facto documentarian of Lowndes County, Mississippi, and its county seat, Columbus--known to locals as “Possum Town.” His body of work recalls many FSA photographers, but Pruitt was not an outsider with an agenda; he was a community member with intimate knowledge of the town and its residents. He photographed his fellow white citizens and Black ones as well, in circumstances ranging from the mundane to the horrific: family picnics, parades, river baptisms, carnivals, fires, funerals, two of Mississippi’s last public and legal executions by hanging, and a lynching. From formal portraits to candid images of events in the moment, Pruitt’s documentary of a specific yet representative southern town offers viewers today an invitation to meditate on the interrelations of photography, community, race, and historical memory.

Columbus native Berkley Hudson was photographed by Pruitt, and for more than three decades he has considered and curated Pruitt’s expansive archive, both as a scholar of media and visual journalism and as a community member. This stunning book presents Pruitt’s photography as never before, combining more than 190 images with a biographical introduction and Hudson’s short essays and reflective captions on subjects such as religion, ethnic identity, the ordinary graces of everyday life, and the exercise of brutal power.

Berkley Hudson is emeritus associate professor of media history at the Missouri School of Journalism of the University of Missouri.


For more information about Berkley Hudson, visit the Author Page.

"O.N. Pruitt’s Possum Town captures the soul—and soullessness—of a Mississippi town in the first half of the 20th century. . . . With ethnographic rigor and the intimacy of a local, Pruitt’s eye roves matter-of-factly between scenes of gilded refinement—the crafted splendor of privilege—and the gruesome violence that makes that privilege possible."—New York Times Book Review

"Will appeal to historians of both the American South and of photography itself, to students of race relations, and to libraries and educational establishments interested in Southern studies."—Analog Forever

"Three decades in the making . . . with nearly two hundred images that comprise the everyday, the frivolous, and the horrific . . . [O.N. Pruitt's Possum Town] includes Hudson’s extensive research and interviews with Pruitt’s subjects."—Garden & Gun

"Although it could be referred to as a proverbial photo book, one thing should be definitively acknowledged: This is not a folksy coffee-table decoration with some cool snaps in it. Instead, it is a meticulously researched undertaking revealing answers, and even more questions, about the first half of 20th-century Americana in the second state to secede from the Union."—Visual Communication Quarterly

""The images and texts cast a spell so potent that readers might be forgiven for feeling as if they had experienced 20th century Columbus, Mississippi for themselves."—photo-eye

world, it is an important piece for US citizens, letting them know that, even at a difficult and dangerous time for many of their fellow citizens, grace and happiness was also within their reach."—Literary Journalism Studies 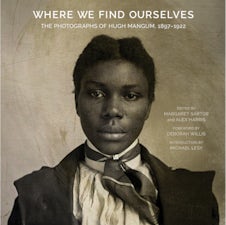 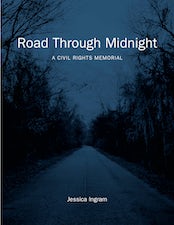