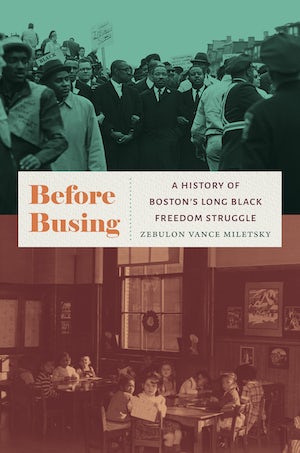 Paperback Available May 2022, but pre-order your copy today!

In many histories of Boston, African Americans have remained almost invisible. Partly as a result, when the 1972 crisis over school desegregation and busing erupted, many observers professed shock at the overt racism on display in the “cradle of liberty.” Yet the city has long been divided over matters of race, and it was also home to a far older Black organizing tradition than many realize. A community of Black activists had fought segregated education since the origins of public schooling and racial inequality since the end of northern slavery.

Before Busing tells the story of the men and women who struggled and demonstrated to make school desegregation a reality in Boston. It reveals the legal efforts and battles over tactics that played out locally and influenced the national Black freedom struggle. And the book gives credit to the Black organizers, parents, and children who fought long and hard battles for justice that have been left out of the standard narratives of the civil rights movement. What emerges is a clear picture of the long and hard-fought campaigns to break the back of Jim Crow education in the North and make Boston into a better, more democratic city—a fight that continues to this day.

“This is a significant contribution, which will do much to shift discussion around Black America’s long struggle for civil rights from the South to the North, and to expose how African Americans in the North, particularly urban Boston, used their particular environments, politics, and social conditions to respond to the rapidly changing social and political conditions. It skillfully shows how the community of Black Bostonians unified and built coalitions to define freedom, citizenship and equality.”—Shawn Leigh Alexander, author of An Army of Lions: The Struggle for Civil Rights before the NAACP