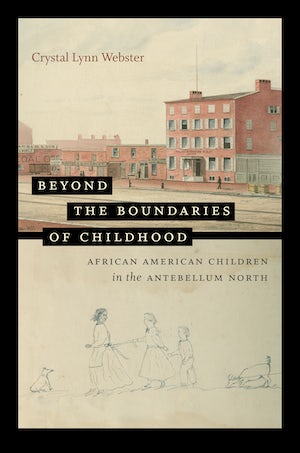 For all that is known about the depth and breadth of African American history, we still understand surprisingly little about the lives of African American children, particularly those affected by northern emancipation. But hidden in institutional records, school primers and penmanship books, biographical sketches, and unpublished documents is a rich archive that reveals the social and affective worlds of northern Black children. Drawing evidence from the urban centers of Boston, New York, and Philadelphia, Crystal Webster's innovative research yields a powerful new history of African American childhood before the Civil War. Webster argues that young African Americans were frequently left outside the nineteenth century's emerging constructions of both race and childhood. They were marginalized in the development of schooling, ignored in debates over child labor, and presumed to lack the inherent innocence ascribed to white children. But Webster shows that Black children nevertheless carved out physical and social space for play, for learning, and for their own aspirations.

Reading her sources against the grain, Webster reveals a complex reality for antebellum Black children. Lacking societal status, they nevertheless found meaningful agency as historical actors, making the most of the limited freedoms and possibilities they enjoyed.

"In this engaging and innovative work, Dr. Crystal Lynn Webster begins the crucial work of filling the gaps in knowledge about Black children in the antebellum era."—Ms. Magazine

“Webster offers glimpses of children who are rarely featured in histories of the Civil War era . . . It is certain that this book will inspire many scholars in African American and Childhood Studies to continue down the path that Webster illuminates so creatively.”—Civil War Book Review

“This concise, gracefully written book, with its tight temporal and geographic focus, is an essential historical contribution and an invitation to future research about northern Black children and the states of unfreedom that shaped their reality.”—Early American Literature

“A remarkable book that speaks to some of the most enduring questions in African American history and politics: what is the meaning of freedom? Is ‘free’ really free? How have Black families navigated institutionalized racism that seeks to undermine their intimate ties? By placing Black children and mothers at the center of her work, Crystal Webster unearths histories that too often have remained invisible.”--LaKisha Michelle Simmons, University of Michigan

"Webster's innovative and beautifully written book demonstrates how Black children in the antebellum North claimed freedom and redefined childhood as they played, worked, and moved through the built environment of schools, orphanages, and city streets. With nuanced attention to material realities and imaginative worlds, Webster brilliantly reveals Black children's contributions to the political struggle for equality and human liberation.”--Corinne Field, University of Virginia