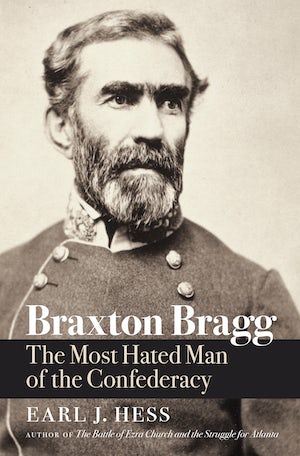 As a leading Confederate general, Braxton Bragg (1817–1876) earned a reputation for incompetence, for wantonly shooting his own soldiers, and for losing battles. This public image established him not only as a scapegoat for the South’s military failures but also as the chief whipping boy of the Confederacy. The strongly negative opinions of Bragg’s contemporaries have continued to color assessments of the general’s military career and character by generations of historians. Rather than take these assessments at face value, Earl J. Hess's biography offers a much more balanced account of Bragg, the man and the officer.

While Hess analyzes Bragg’s many campaigns and battles, he also emphasizes how his contemporaries viewed his successes and failures and how these reactions affected Bragg both personally and professionally. The testimony and opinions of other members of the Confederate army--including Bragg’s superiors, his fellow generals, and his subordinates--reveal how the general became a symbol for the larger military failures that undid the Confederacy. By connecting the general’s personal life to his military career, Hess positions Bragg as a figure saddled with unwarranted infamy and humanizes him as a flawed yet misunderstood figure in Civil War history.

Earl J. Hess is Stewart W. McClelland Chair in History at Lincoln Memorial University and author of many books on the Civil War, including The Battle of Ezra Church and the Struggle for Atlanta.
For more information about Earl J. Hess, visit the Author Page.

"A thoughtful reexamination of a man who has become, unfortunately and unfairly, the South's 'chief whipping boy'. . . . [A] sharp-eyed profile of the general's dour personality and snakebit career [that] will bring much-needed perspective to future studies of the Confederacy."--Russell S. Bonds, The Wall Street Journal

“Well-documented, Hess’s examination of Bragg is balanced and fair and will interest all Civil War aficionados.”--Library Journal

"An enjoyable read that makes a thought-provoking argument. . . . [An] even-handed look at Bragg's military career [that] will be useful reading for anyone interested in Civil War history, particularly the western theater."--The Civil War Monitor

“Hess is a prolific author on many Civil War subjects with a well-earned reputation for shedding new light on long accepted theses. Bragg could not have asked for a more thoughtful, careful, and scrupulously honest evaluator. . . . Hess writes with an easy grace born of erudite scholarship and years in the classroom challenging fresh eyes to look upon old stories and interpret them in new ways.”--Civil War Round Table of the District of Columbia