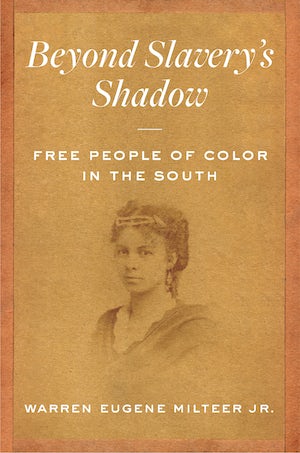 On the eve of the Civil War, most people of color in the United States toiled in bondage. Yet nearly half a million of these individuals, including over 250,000 in the South, were free. In Beyond Slavery's Shadow, Warren Eugene Milteer Jr. draws from a wide array of sources to demonstrate that from the colonial period through the Civil War, the growing influence of white supremacy and proslavery extremism created serious challenges for free persons categorized as "negroes," "mulattoes," "mustees," "Indians," or simply "free people of color" in the South. Segregation, exclusion, disfranchisement, and discriminatory punishment were ingrained in their collective experiences. Nevertheless, in the face of attempts to deny them the most basic privileges and rights, free people of color defended their families and established organizations and businesses.

These people were both privileged and victimized, both celebrated and despised, in a region characterized by social inconsistency. Milteer's analysis of the way wealth, gender, and occupation intersected with ideas promoting white supremacy and discrimination reveals a wide range of social interactions and life outcomes for the South's free people of color and helps to explain societal contradictions that continue to appear in the modern United States.

Warren E. Milteer Jr. is assistant professor of history at the University of North Carolina at Greensboro and the author of North Carolina’s Free People of Color, 1715–1885.
For more information about Warren Eugene Milteer Jr., visit the Author Page.

"Synthesizing local histories and individual stories, Milteer opens to interested readers a fresh vista of a more complicated history of the South and the position of people of color, with implications for the 21st century."—Library Journal

“Milteer demonstrates how free people of color pursued and often achieved meaningful freedom in an oppressive society and provides a welcome update to the broader discussion of freedom and slavery in the antebellum American South.”—Journal of Social History

“Milteer . . . sheds light on a relatively unknown topic in the history of the United States. . . . His work is an important read to fill this gap in knowledge."—Civil War Book Review

"Recommended . . . Milteer demonstrates important distinctions between the rhetoric and actual practice of regulating free people of color and how their experiences differed by location, whether in rural or urban areas, the upper or lower South, or former English or Spanish colonies."—CHOICE

“A well-documented and written exploration of the free people of color in the southern United States.”—Southwestern Historical Quarterly

“[Milteer] masterfully combines a general synthesis with distinct local histories. What emerges is a comprehensive picture that stresses the diversity of the American experience.”—Slavery & Abolition