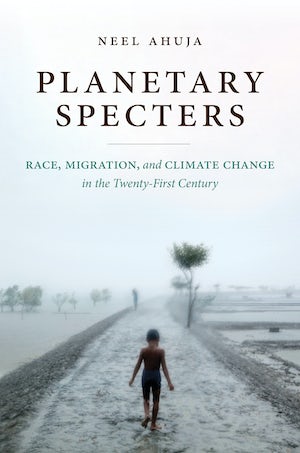 To purchase online via an independent bookstore, visit Bookshop.org
Neel Ahuja tracks the figure of the climate refugee in public media and policy over the past decade, arguing that journalists, security experts, politicians, and nongovernmental organizations have often oversimplified climate change and obfuscated the processes that drive mass migration. To understand the systemic reasons for displacement, Ahuja argues, it is necessary to reframe climate disaster as interlinked with the history of capitalism and the global politics of race, wherein racist presumptions about agrarian underdevelopment and Indigenous knowledge mask how financial, development, migration, and climate adaptation policies reproduce growing inequalities.

Drawing on the work of Cedric Robinson and theories of racial capitalism, Ahuja considers how the oil industry transformed the economic and geopolitical processes that lead to displacement. From South Asia to the Persian Gulf, Europe, and North America, Ahuja studies how Asian trade, finance, and labor connections have changed the nature of race, borders, warfare, and capitalism since the 1970s. Ultimately, Ahuja argues that only by reckoning with how climate change emerges out of longer histories of race, colonialism, and capitalism can we begin to build a sustainable and just future for those most affected by environmental change.

Neel Ahuja is associate professor of feminist studies and a core faculty member of the Critical Race and Ethnic Studies Program at the University of California, Santa Cruz.
For more information about Neel Ahuja, visit the Author Page.

"As the planet continues hurtling toward disaster at breakneck speed, Ahuja presents a convincing framework for understanding environmental racism."—Scientific American

"Neel Ahuja’s Planetary Specters is a wholly original, important analysis of the figure of the 'climate refugee.' Drawing upon racial capitalism and critical refugee studies, this analysis refocuses the attention back from the 'climate refugee' to histories of empire, development theory and practice, and ongoing legacies of oil extraction and capitalist violence. A crucial read for those who care about climate injustice, migrant circuits, and how to imagine futures after capitalism."--Julie Sze, author of Environmental Justice in a Moment of Danger

"This is an outstanding book. The breadth of its discussion--particularly the geographical regions and historical periods under study--is impressive. Neel Ahuja makes a critical intervention into ongoing discussions of migration, climate change, and war, asking us to pause and to ask: what are the conditions in which people are forced to move, and how are these conditions historically produced?"--Renisa Mawani, author of Across Oceans of Law: The Komagata Maru and Jurisdiction in the Time of Empire

"Vast research and careful analysis has gone into this book. It is clearly written and forcefully argued, and it is a tremendously important and compelling work that should be read by anyone who wants to understand climate change."--Priscilla Wald, author of Contagious: Cultures, Carriers, and the Outbreak Narrative