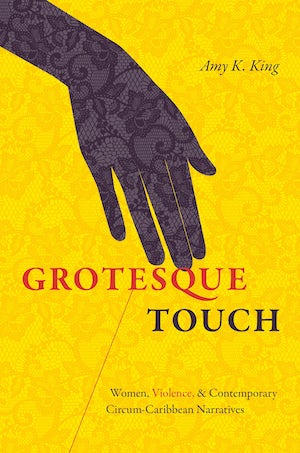 To purchase online via an independent bookstore, visit Bookshop.org
In this book, Amy K. King examines how violence between women in contemporary Caribbean and American texts is rooted in plantation slavery. Analyzing films, television shows, novels, short stories, poems, book covers, and paintings, King shows how contemporary media reuse salacious and stereotypical depictions of relationships between women living within the plantation system to confront its legacy in the present. The vestiges of these relationships--enslavers and enslaved women, employers and domestic servants, lovers and rivals--negate characters' efforts to imagine non-abusive approaches to power and agency. King’s work goes beyond any other study to date to examine the intersections of gender, sexuality, race, ethnicity, class, ability, and nationality in U.S. and Caribbean depictions of violence between women in the wake of slavery.

Amy K. King is a lecturer in English at Auburn University.
For more information about Amy King, visit the Author Page.

"A deeply researched, historically contextualized, and effectively argued work that takes seriously women’s violence in a range of texts—fictional, visual, and audiovisual."—Tulsa Studies in Women's Literature

"Amy King provides us with excellent analysis of a fascinating range of literary and visual texts. Few scholars of the circum-Caribbean engage with both the literary and the visual with as much rigor and facility as King does here, and her work is crucial for understanding the contemporary United States and Caribbean."--Raphael Dalleo, author of American Imperialism's Undead: The Occupation and the Rise of Caribbean Anticolonialism

"As no prior book has quite accomplished, Grotesque Touch forces readers to recognize the normalization and performativity of women's violence in spite of orientations toward the feminine that would frame such violence as inherently aberrant or monstrous, and it underscores how violence between women is deeply entrenched in plantation structures of power."--Keith Cartwright, University of North Florida