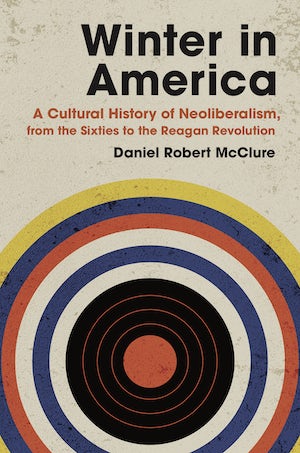 Neoliberalism took shape in the 1930s and 1940s as a transnational political philosophy and system of economic, political, and cultural relations. Resting on the fundamental premise that the free market should be unfettered by government intrusion, neoliberal policies have primarily redirected the state’s prerogatives away from the postwar Keynesian welfare system and toward the insulation of finance and corporate America from democratic pressure. As neoliberal ideas gained political currency in the 1960s and 1970s, a reactionary cultural turn catalyzed their ascension. The cinema, music, magazine culture, and current events discourse of the 1970s provided the space of negotiation permitting these ideas to take hold and be challenged.

Daniel Robert McClure’s book follows the interaction between culture and economics during the transition from Keynesianism in the mid-1960s to the triumph of neoliberalism at the dawn of the 1980s. From the 1965 debate between William F. Buckley and James Baldwin, through the pages of BusinessWeek and Playboy, to the rise of exploitation cinema in the 1970s, McClure tracks the increasingly shared perception by white males that they had “lost” their long-standing rights and that a great neoliberal reckoning might restore America’s repressive racial, sexual, gendered, and classed foundations in the wake of the 1960s.

“Winter in America is terrific, moving ably between culture and political economy to mount a sophisticated consideration of race and gender within neoliberalism, all while taking the long view, in contrast to so many accounts supposing that 1972 marked the start something fully new. As monuments fall and we have a chance to rethink received wisdom, it offers the reader a journey that is both unpredictable and exciting.”—David Roediger, author of The Wages of Whiteness

"At a time when modern-day America's cultural and political divides are wider than ever, it's necessary to ask how the nation came to this painful point. In Winter in America, Daniel Robert McClure provides answers. This book frequently makes for uncomfortable reading, but honest reflection on painful facts isn't supposed to be easy. The past has much to teach us, and Winter in America is an essential guide."--Jeff Guinn, New York Times bestselling author of Manson: The Life and Times of Charles Manson and The Road to Jonestown: Jim Jones and Peoples Temple