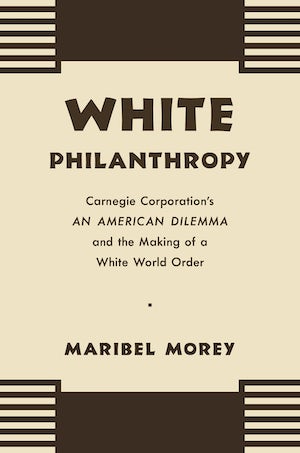 Since its publication in 1944, many Americans have described Gunnar Myrdal’s An American Dilemma as a defining text on U.S. race relations. Here, Maribel Morey confirms with historical evidence what many critics of the book have suspected: An American Dilemma was not commissioned, funded, or written with the goal of challenging white supremacy. Instead, Morey reveals it was commissioned by Carnegie Corporation president Frederick Keppel, and researched and written by Myrdal, with the intent of solidifying white rule over Black people in the United States.

Morey details the complex global origins of An American Dilemma, illustrating its links to Carnegie Corporation’s funding of social science research meant to help white policymakers in the Anglo-American world address perceived problems in their governance of Black people. Morey also unpacks the text itself, arguing that Myrdal ultimately complemented his funder’s intentions for the project by keeping white Americans as his principal audience and guiding them towards a national policy program on Black Americans that would keep intact white domination. Because for Myrdal and Carnegie Corporation alike, international order rested on white Anglo-Americans’ continued ability to dominate effectively.

Maribel Morey is founding executive director of the Miami Institute for the Social Sciences.
For more information about Maribel Morey, visit the Author Page.

“Ground-breaking...A major, original contribution to an understanding of the racialised basis of elite US institutions, networked into the American establishment; their huge impact on US life especially in this case on ‘race relations’ and understanding of racial power structures...While there is no doubt that Morey’s study is at heart a work of brilliant historical scholarship, it screams with relevance to current discussions of race and inequality, and White supremacy.”--The Wire

“Well-researched... Carnegie, its president Keppel, and Myrdal framed An American Dilemma. Morey’s White Philanthropy presents much evidence and an argument that they and the project were, well, white supremacist.”--Law & Liberty

“White Philanthropy is a vivid and thorough account of how a wealthy and powerful philanthropic organisation initiated, and eventually completed, a project to establish how white governance could improve the status of Black people. Morey’s work draws close attention to the capacity of elite philanthropy to disseminate and uphold ideologies. More importantly, it carefully explains the tools and mechanisms that make this, and a white world order, viable.”--LSE Review of Books

"White Philanthropy sets a new standard for critical philanthropy studies, exposing the historical underpinnings of how extreme wealth has perpetuated racial subordination in the United States and Africa. Morey’s finely textured analysis of Andrew Carnegie, one of the most influential philanthropists in U.S. history, presents a bold, compelling, and provocative interpretation of how his foundation, the Carnegie Corporation, funded second-class education and social science research to effectively manage Black populations around the globe."--Khalil Gibran Muhammad, Harvard University

"Offering spectacular reach and an audacious commitment to archival methods, Morey's work is listening to African and Black political thought on the question of colonialism and segregation while also humanizing the white actors who desperately needed to believe that their unique constitutional, bureaucratic, and social scientific interventions were leaving the ideologies of slavery and racial colonialism behind. Thoughtful and wise, this book asks us to take a serious look at what the 'American Dilemma' actually is and understand it within a global context."--Tiffany Willoughby-Herard, University of California, Irvine

"Maribel Morey makes a major, original contribution to understanding the racialized basis of elite U.S. institutions that are networked into the American establishment and their huge impact on U.S. life, especially on 'race relations' and understanding racial power structures. The scholarship is impeccable, thorough, detailed, painstaking, and extensive. I certainly have not encountered any book-length study like this. It provides such compelling detail in so persuasive a manner as to ensure that other scholars do not make the mistake of misunderstanding Myrdal’s landmark study again."--Inderjeet Parmar, City, University of London