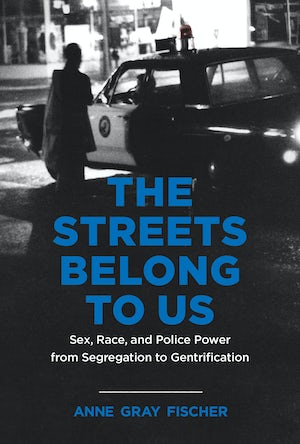 Men, especially Black men, often stand in as the ultimate symbol of the mass incarceration crisis in the United States. Women are treated as marginal, if not overlooked altogether, in histories of the criminal legal system. In The Streets Belong to Us—a searing history of women and police in the modern United States—Anne Gray Fischer narrates how sexual policing fueled a dramatic expansion of police power. The enormous discretionary power that police officers wield to surveil, target, and arrest anyone they deem suspicious was tested, legitimized, and legalized through the policing of women's sexuality and their right to move freely through city streets.

Throughout the twentieth century, police departments achieved a stunning consolidation of urban authority through the strategic discretionary enforcement of morals laws, including disorderly conduct, vagrancy, and other prostitution-related misdemeanors. Between Prohibition in the 1920s and the rise of "broken windows" policing in the 1980s, police targeted white and Black women in distinct but interconnected ways. These tactics reveal the centrality of racist and sexist myths to the justification and deployment of state power. Sexual policing did not just enhance police power. It also transformed cities from segregated sites of "urban vice" into the gentrified sites of Black displacement and banishment we live in today. By illuminating both the racial dimension of sexual liberalism and the gender dimension of policing in Black neighborhoods, The Streets Belong to Us illustrates the decisive role that race, gender, and sexuality played in the construction of urban police regimes.

“Revelatory. . . . While movements like SayHerName highlight police violence against Black women today, [Fischer] shows us its deep roots in our history, our laws, and our cities.” —The Atlantic

“Richly detailed and thoroughly researched. . . . It is challenging to take an intersectional lens to historical materials, but Fischer’s monograph shows just how valuable that work can be.” —American Journal of Legal History

“Anne Gray Fischer’s crucial book reveals the utterly pivotal role of the sexual policing of Black women in the vast buildup of police power across the twentieth-century United States. Brilliantly researched and compellingly argued, The Streets Belong to Us is a must-read for all who seek to understand the making of today’s policing crisis.”—Emily Thuma, author of All Our Trials: Prisons, Policing, and the Feminist Fight to End Violence

"Well written, intellectually rigorous, and compelling, this impressive book tackles long-standing issues of policing and gender through the legal policies that impacted American women from the Great Depression to the mid-1990s. Its argument is historical and yet all too timely, making devastatingly clear how women's bodies, and particularly Black women's bodies, were central to strengthening and legitimizing the same carceral policing that violated and oppressed them."—Cheryl Hicks, author of Talk with You Like a Woman: African American Women, Justice, and Reform in New York, 1890-1935

"This innovative, deeply researched, and forcefully argued book deciphers an overlooked mechanism by which the state executed violence, namely the sexual policing of women’s bodies that legitimated, legalized, and sanctioned the mass expansion of police power. By attending to public morals enforcement over the course of the twentieth century, this book reveals how police power infiltrated the quotidian dimensions of women’s lives, mapping and remapping patriarchal and racial power onto cities’ built environment. This book perceptively shows a process that adapted over time, targeting white women's sexuality during Prohibition, then criminalizing Black women during the era of ‘urban renewal,’ remaking the modern city along sexualized, racialized lines."— Keona Ervin, author of Gateway to Equality: Black Women and the Struggle for Economic Justice in St. Louis

“This incredibly important book will forever alter the historical record on racialized policing. Fischer shows how the police developed and refined their strategies not by targeting Black men on the street but by targeting Black women—illuminating the centrality of Black women’s sexuality to the entire project of racial spatial control.”—Tricia Rose, author of Longing to Tell: Black Women Talk about Sexuality and Intimacy