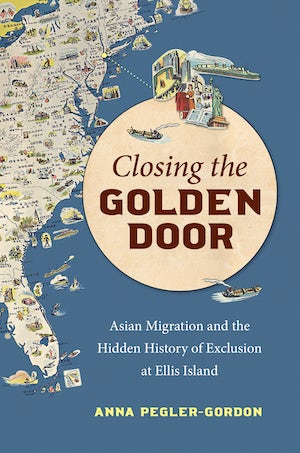 The immigration station at New York’s Ellis Island opened in 1892 and remained the largest U.S. port for immigrant entry until World War I. In popular memory, Ellis Island is typically seen as a gateway for Europeans seeking to join the “great American melting pot.” But as this fresh examination of Ellis Island’s history reveals, it was also a major site of immigrant detention and exclusion, especially for Chinese, Japanese, and other Asian travelers and maritime laborers who reached New York City from Europe, the Americas and the Caribbean, and even within the United States. And from 1924 to 1954, the station functioned as a detention camp and deportation center for a range of people deemed undesirable.

Anna Pegler-Gordon draws on immigrants’ oral histories and memoirs, government archives, newspapers, and other sources to reorient the history of migration and exclusion in the United States. In chronicling the circumstances of those who passed through or were detained at Ellis Island, she shows that Asian exclusion was both larger in scope and more limited in force than has been previously recognized.

Anna Pegler-Gordon is a professor in the James Madison College and the Asian Pacific American Studies Program at Michigan State University.
For more information about Anna Pegler-Gordon, visit the Author Page.

"Pegler-Gordon deserves credit for taking on a very large subject and transforming it into a coherent and well-organized narrative. The chapter on the wartime confinement of Japanese aliens expands the larger literature on wartime Japanese confinement, especially works on the Department of Justice camps by authors such as Louis Fiset and Tetsuden Kashima. In our current age of official bans on immigration and refugees, it is worthwhile to have a historical insight into the management of marginalized aliens."—Nichi Bei

“Pegler-Gordon offers a novel and convincing case for understanding Ellis Island as a site for Asian immigration and deportation in the early twentieth century.”—Greg Robinson, Université du Québec a Montréal

"Pegler-Gordon deepens our understanding of the complex geographies of Asian American migration and immigrant detention. This book is steeped in the best traditions of social history.”—Ethan Blue, The University of Western Australia