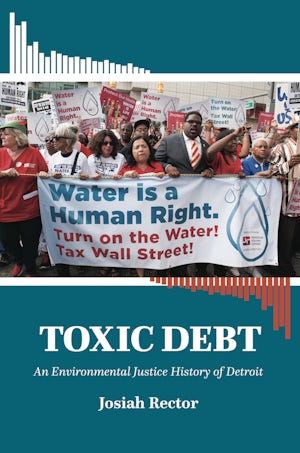 To purchase online via an independent bookstore, visit Bookshop.org
From the mid-nineteenth until the mid-twentieth century, environmentally unregulated industrial capitalism produced outsized environmental risks for poor and working-class Detroiters, made all the worse for African Americans by housing and job discrimination. Then as the auto industry abandoned Detroit, the banking and real estate industries turned those risks into disasters with predatory loans to African American homebuyers, and to an increasingly indebted city government. Following years of cuts in welfare assistance to poor families and a devastating subprime mortgage meltdown, the state of Michigan used municipal debt to justify suspending democracy in majority-Black cities. In Detroit and Flint, austerity policies imposed under emergency financial management deprived hundreds of thousands of people of clean water, with lethal consequences that most recently exacerbated the spread of COVID-19.

Toxic Debt is not only a book about racism, capitalism, and the making of these environmental disasters. It is also a history of Detroit's environmental justice movement, which emerged from over a century of battles over public health in the city and involved radical auto workers, ecofeminists, and working-class women fighting for clean water. Linking the histories of urban political economy, the environment, and social movements, Toxic Debt lucidly narrates the story of debt, environmental disaster, and resistance in Detroit.

Josiah Rector is assistant professor of history at the University of Houston.


For more information about Josiah Rector, visit the Author Page.

"[Josiah Rector] has written a book that advances two major interventions. First, it pushes back the environmental justice movement’s genesis to midcentury union organizing. Second, and just as significantly, it firmly connects the effects of debt and austerity—that is to say, capitalism—to environmental racism...Toxic Debt is an outstanding book...relentlessly clear-eyed in its focus on contemporary injustice and resistance."—Scott W. Stern, The New York Review of Books

“Toxic Debt is a vital record of a decades-long war against descendants of enslaved Africans who have fought to make the city of Detroit their home. Josiah Rector documents with disturbing clarity how those who fled to Detroit to escape southern racism became the targets of labor exploitation, environmental abuse, mass water shutoffs, and attacks on their democratic rights. Black Detroit has been marked for expulsion from the city because it is a community that has never been part of the corporate vision of a new kind of Detroit. What most distinguishes the book is its account of Black Detroit’s unrelenting, determined, and principled resistance.”—Mark P. Fancher, ACLU of Michigan Racial Justice Project Attorney

“Both rich in detail and analytically sophisticated, this book makes a major contribution to the scholarship on organized labor’s role in urban environmental justice activism.”—Ellen Griffith Spears, University of Alabama.