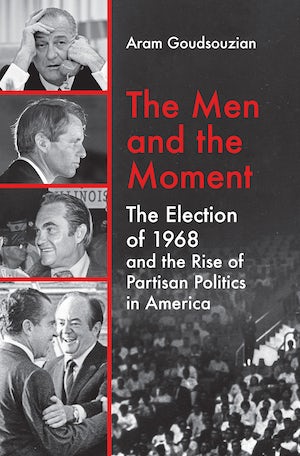 The presidential election of 1968 forever changed American politics. In this character-driven narrative history, Aram Goudsouzian portrays the key transformations that played out over that dramatic year. It was the last "Old Politics" campaign, where political machines and party bosses determined the major nominees, even as the "New Politics" of grassroots participation powered primary elections. It was an election that showed how candidates from both the Left and Right could seize on "hot-button" issues to alter the larger political dynamic. It showcased the power of television to "package" politicians and political ideas, and it played out against an extraordinary dramatic global tableau of chaos and conflict. More than anything else, it was a moment decided by a contest of political personalities, as a group of men battled for the presidency, with momentous implications for the nation’s future.

Well-paced, accessible, and engagingly written, Goudsouzian’s book chronicles anew the characters and events of the 1968 campaign as an essential moment in American history, one with clear resonance in our contemporary political moment.

Aram Goudsouzian is professor of history at the University of Memphis. His previous books include Sidney Poitier and Down to the Crossroads.
For more information about Aram Goudsouzian, visit the Author Page.

"The organization of the book provides some fresh insights. Goudsouzian's narrative takes us into a political world different from today's--a vanishing world where a candidate's nomination was influenced but not determined by the primaries."--Washington Post

"Certainly worthy of attention as a reliable assessment of this critical election that established a new political environment for years to come. Suitable for most collections."--Library Journal

"Goudsouzian's book is slim and compulsively readable; as a primer on the election, it is unmatched."--Clay Risen, Chapter 16

“Offers a brisk chronicle of the pivotal US presidential election of 1968 by focusing on eight of the candidates vying for the nation’s highest office. . . . This book will be useful for students of both history and political science.”--Choice Reviews

“A detailed, authoritative, well-written, and often gripping account of the tumultuous election year of 1968. . . . Goudsouzian’s writing style is energetic, accessible, and at times laced with verve and wit. . . . Overall, The Men and the Moment is an excellent read. . . . [For] both academic audiences, especially in American history and politics, and general readers.”--Journal of Southern History

“Goudsouzian’s well-written, engaging new book shows that the 1968 election remains open for reinterpretation. . . . A useful primer on the 1968 election, accessible to undergraduates and general readers alike. . . . The book is a thrilling, insightful introduction to one of the most contentious elections in history.”--North Carolina Historical Review

Watch: Goudsouzian talks to WREG-TV Memphis about the election that marked the identities of the Republican and Democratic parties as we know them today. (04/16/2019, running time 5:17)