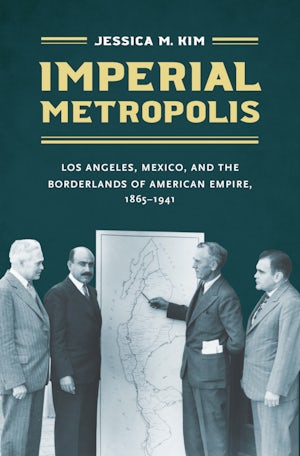 In this compelling narrative of capitalist development and revolutionary response, Jessica M. Kim reexamines the rise of Los Angeles from a small town to a global city against the backdrop of the U.S.-Mexico borderlands, Gilded Age economics, and American empire. It is a far-reaching transnational history, chronicling how Los Angeles boosters transformed the borderlands through urban and imperial capitalism at the end of the nineteenth century and how the Mexican Revolution redefined those same capitalist networks into the twentieth.

Kim draws on archives in the United States and Mexico to argue that financial networks emerging from Los Angeles drove economic transformations in the borderlands, reshaped social relations across wide swaths of territory, and deployed racial hierarchies to advance investment projects across the border. However, the Mexican Revolution, with its implicit critique of imperialism, disrupted the networks of investment and exploitation that had structured the borderlands for sixty years, and reconfigured transnational systems of infrastructure and trade. Kim provides the first history to connect Los Angeles’s urban expansionism with more continental and global currents, and what results is a rich account of real and imagined geographies of city, race, and empire.

“Kim is deft in tying together the histories of Mexico, the US-Mexican borderlands, and the US West. This engaging and timely book is a welcome addition to the literature on these various subjects.”--CHOICE

"Offers useful andthought-provoking insights for historians interested in imperialism, urban development, capitalism, and race, as well as for scholars of revolutionary Mexico and U.S.-Latin American relations."--Journal of the Gilded Age and Progressive Era

"Imperial Metropolis places Mexico at the center of a conversation on the changing state of American expansion, a historical reality that scholars of American empire—drawn to Hawaii and the Philippines in the 1890s—have generally missed. It will certainly spark new and important conversations related to the borderlands and Southern Californian historiography ... and explains how Los Angeles became a city with global reach and power via its unique history and positioning in the borderlands."--Diplomatic History

"An ambitious, highly original, and captivating study. Kim’s wide range of U.S. and Mexican archival sources allows her to present a fine-grained contrapuntal history that carefully heeds the making, operating, and unmaking of empire on the ground in both Los Angeles and several Mexican regions. Written in a compelling, engaging style, it is is an outstanding history of Los Angeles that convincingly demonstrates thatthe “city of quartz” is also a city of empire."--H-Diplo

"This is an excellent book--Kim is a beautiful writer, her characters are fascinating, and her arguments about how Mexico shaped the City of Angels make a robust contribution to borderlands history."--Geraldo Cadava, Northwestern University