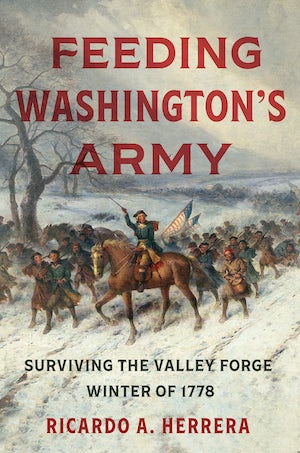 In this major new history of the Continental Army’s Grand Forage of 1778, award-winning military historian Ricardo A. Herrera uncovers what daily life was like for soldiers during the darkest and coldest days of the American Revolution: the Valley Forge winter. Here, the army launched its largest and riskiest operation—not a bloody battle against British forces but a campaign to feed itself and prevent starvation or dispersal during the long encampment. Herrera brings to light the army’s herculean efforts to feed itself, support local and Continental governments, and challenge the British Army.

Highlighting the missteps and triumphs of both General George Washington and his officers as well as ordinary soldiers, sailors, and militiamen, Feeding Washington’s Army moves far beyond oft-told, heroic, and mythical tales of Valley Forge and digs deeply into its daily reality, revealing how close the Continental Army came to succumbing to starvation and how strong and resourceful its soldiers and leaders actually were.

Ricardo A. Herrera is professor of military history at the School of Advanced Military Studies at the U.S. Army Command and General Staff College.
For more information about Ricardo A. Herrera, visit the Author Page.

"Impeccably researched, this is a needed addition to the story of the war for independence.”—Library Journal

"Through his telling, Herrera is in command of the primary sources, which are disparate and separated by the Atlantic Ocean. His breadth and depth are so great that his introductory chapter, which sets the stage for Valley Forge, almost reads like a narrative conversation between Washington and various civilian officials, from the commissary general of the Continental army, William Buchanan, to the governor of Maryland, Thomas Johnson. The author accomplishes the rare feat of making logistics interesting and illustrates the specifics of how logistics was a critical component of the larger strategic picture for the Americans and the British."—H-War

"Herrera does a quietly, no-nonsense fantastic job of fleshing out this Grand Forage, complete with personnel lists, inventories of equipment, and the interplay of every personality involved. Far from being yet another melodramatic rehash of soldierly stoicism, Feeding Washington’s Army is an invaluable elaboration of a key footnote in the Revolutionary War."—Steve Donoghue, Open Letters Review

"This is an excellent study, well researched, and clearly written . . . . Herrera’s exploration into an otherwise insufficiently studied topic is highly recommended."—The Journal of America's Military Past

“The Continental Army was not about to go down without a forage—and a grand one at that. Rick Herrera in Feeding Washington’s Army provides a lively story and argument that the encampment at Valley Forge was anything but a mythic scene of passive, static self-sacrifice. The Grand Forage of 1778 to garner the supplies necessary to sustain the Revolution’s main army may have been an act of desperation, but as Herrera proves, it also manifested the acumen and daring of General Washington and the commanders who executed the mission.”—Holly Mayer, author of Congress's Own: A Canadian Regiment, the Continental Army, and American Union

“Ricardo Herrera’s Feeding Washington’s Army is one of the most significant military histories of the Revolutionary War in decades, providing insight into the strategic planning and execution of George Washington and key subordinates like Nathanael Greene. Herrera’s riveting account of the Grand Forage illuminates how Valley Forge was a story not just of soldiers’ privation and survival but also of the critical strategic importance of military supplies.”—Sarah Purcell, author of Sealed with Blood: War, Sacrifice, and Memory in Revolutionary America