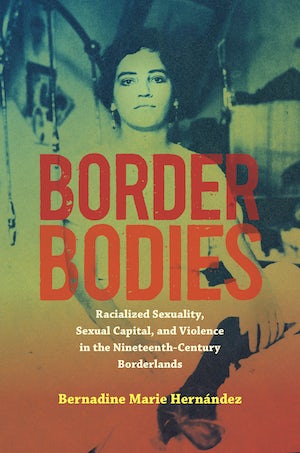 In this study of sex, gender, sexual violence, and power along the border, Bernadine Marie Hernández brings to light under-heard stories of women who lived in a critical era of American history. Elaborating on the concept of sexual capital, she uses little-known newspapers and periodicals, letters, testimonios, court cases, short stories, and photographs to reveal how sex, violence, and capital conspired to govern not only women’s bodies but their role in the changing American Southwest. Hernández focuses on a time when the borderlands saw a rapid influx of white settlers who encountered elite landholding Californios, Hispanos, and Tejanos. Sex was inseparable from power in the borderlands, and women were integral to the stabilization of that power.

In drawing these stories from the archive, Hernández illuminates contemporary ideas of sexuality through the lens of the borderland’s history of expansionist, violent, and gendered conquest. By extension, Hernández argues that Mexicana, Nuevomexicana, Californiana, and Tejana women were key actors in the formation of the western United States, even as they are too often erased from the region’s story.

"This important, nuanced volume shines a light on the importance of Mexicana, Nuevomexicana, Californiana, and Tejana women in the evolution of the U.S. (south)west."—Ms. Magazine

“This book effectively historicizes the contemporary treatment of brown women in the U.S.-Mexico borderlands while offering readers the tools to unpack and rectify the effects of systemic, racialized, sexual violence. The biggest contributions this book makes are in its insistence on the materiality of sex, the centrality of brown, female bodies to the economic history of the United States, and the challenge that the materiality of brown sex poses to contemporary Marxism. Bernadine Marie Hernández pushes the envelope on contemporary conversations around race, space, and sex.”—Marissa López, University of California, Los Angeles

“Innovative in its approach to race, gender, and capitalism, Border Bodies gives readers a significant and fascinating look at Mexican American women’s lives on the U.S. border. Hernández uncovers forgotten stories of lives that bring new understanding of American imperialism during the nineteenth century.”—Anthony Mora, University of Michigan