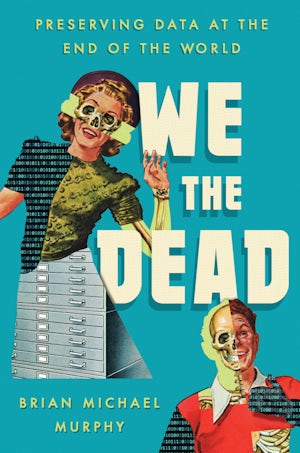 Locked away in refrigerated vaults, sanitized by gas chambers, and secured within bombproof caverns deep under mountains are America’s most prized materials: the ever-expanding collection of records that now accompany each of us from birth to death. This data complex backs up and protects our most vital information against decay and destruction, and yet it binds us to corporate and government institutions whose power is also preserved in its bunkers, infrastructures, and sterilized spaces.

We the Dead traces the emergence of the data complex in the early twentieth century and guides readers through its expansion in a series of moments when Americans thought they were living just before the end of the world. Depression-era eugenicists feared racial contamination and the downfall of the white American family, while contemporary technologists seek ever more durable and denser materials for storing data, from microetched metal discs to cryptocurrency keys encoded in synthetic DNA. Artfully written and packed with provocative ideas, this haunting book illuminates the dark places of the data complex and the ways it increasingly blurs the lines between human and machine, biological body and data body, life and digital afterlife.

“We the Dead is the rare book that opens new lines of investigation while also entertaining and provoking the reader. Some of the historical case studies that Brian Murphy unearthed (gas chambers for rare books! durable metal film strips! atomic bomb–tested filing cabinets!) were so outrageous and profound that I found myself laughing out loud while reading. It was a shock of recognition. . . . We are already the dead of the book’s title, whether we like it or not.”—Brian Hochman, author of The Listeners: A History of Wiretapping in the United States

“Well written, thoughtful, and provocative. We the Dead is intellectually engaging and fascinating—I can honestly think of very few books like it.”—Tung-Hui Hu, author of A Prehistory of the Cloud