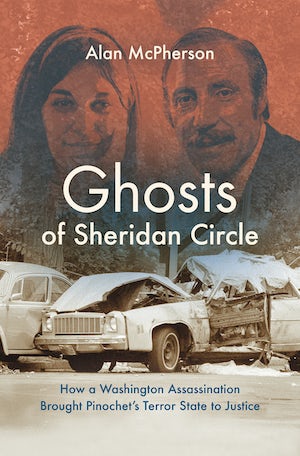 "The book re-explores the Letelier-Moffitt case with new interview-based evidence. It also paints a vivid picture of Chilean-U.S. relations during the Cold War, of Chile’s brutal dictatorship, and highlights some of the workings of Operation Condor, the international surveillance and assassination ring that Pinochet created via the DINA in order to eliminate leftist rivals abroad. Not least, however, Ghosts also highlights the human dimensions of an infamous crime that affected not only the families of the victims, but their colleagues, defenders, and opponents, as well as the prospects for Chile’s future as a democracy."--H-Diplo

“This painful, exciting, and moving tale. . . . pays moving homage to a profound tragedy and to the resilience of a band of people who, over the course of decades, fought and helped to win a measure of justice for their loved ones and for tens of thousands of victims. It is a story that will likely linger with you for a long time.”--North American Congress on Latin America – Report on the Americas

“Justice, and the many obstacles to its attainment, is the unstated theme of Alan McPherson’s Ghosts of Sheridan Circle, a history of a great political crime and its aftermath. . . . To tell this story, Alan McPherson . . . has tempered the dry precision of academic history with stylistic elements borrowed from the true-crime genre: nonfiction storytelling that generates horror, sympathy and suspense.”--Foreign Service Journal