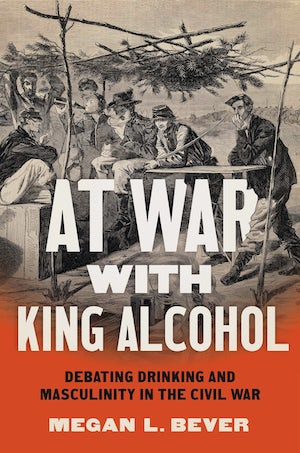 Liquor was essential to military culture as well as healthcare regimens in both the Union and Confederate armies. But its widespread use and misuse caused severe disruptions as unruly drunken soldiers and officers stumbled down roads and through towns, colliding with civilians. The problems surrounding liquor prompted debates among military officials, soldiers, and civilians as to what constituted acceptable drinking. While Americans never could agree on precisely when it was appropriate to make or drink alcohol, one consensus emerged: the wasteful manufacture and reckless consumption of spirits during a time of civil war was so unpatriotic that it sometimes bordered on disloyalty.

Using an array of sources—temperance periodicals, soldiers' accounts, legislative proceedings, and military records—Megan L. Bever explores the relationship between war, the practical realities of drinking alcohol, and temperance sentiment within the United States. Her insightful conclusions promise to shed new light on our understanding of soldiers' and veterans' lives, civil-military relations, and the complicated relationship between drinking, morality, and masculinity.

"Bever's excellent study of liquor and its use during the Civil War leaves no ground uncovered. The author's wonderful research tells a compelling story; this study is a model for other authors."—Barbara A. Gannon, University of Central Florida

"The U.S. temperance movement was one of the largest reform efforts of the antebellum period. But when the Civil War broke out, the otherwise raucous disputes about temperance seemed to simmer. In this smartly conceived and wonderful book, Megan Bever reveals how the debates about alcohol actually continued during the war and how temperance reformers feared that the war would undermine their fastidious efforts. Nurses, chaplains, and military officers were constantly dealing with the effects of alcohol in camps, hospitals, and on the battlefield. This is a truly original study that offers a fresh new way of thinking about the Civil War and its discontents."—Jim Downs, Gilder Lehrman–National Endowment for the Humanities Professor of Civil War Studies and History, Gettysburg College