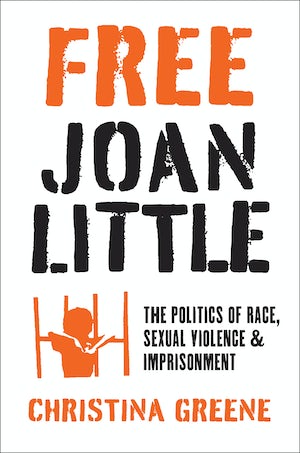 To purchase online via an independent bookstore, visit Bookshop.org
Early on a summer morning in 1974, local officials found the jailer Clarence Alligood stabbed to death in a cell in the women's section of a rural North Carolina jail. Fleeing the scene was Joan Little, twenty years old, poor, Black, and in trouble. After turning herself in, Little faced a possible death sentence in the state's gas chamber. At her trial, which was followed around the world, Little claimed that she had killed Alligood in self-defense against sexual assault. Local and national figures took up Little's cause, protesting her innocence. After a five-week trial, Little was acquitted. But the case stirred debate about a woman's right to use deadly force to resist sexual violence.

Through the prism of Little's rape-murder trial and the Free Joan Little campaign, Christina Greene explores the intersecting histories of African American women, mass incarceration, sexual violence, and social movements of the 1970s and 1980s. Greene argues that Little's circumstances prior to her arrest, assault, and trial were shaped by unprecedented increases in federal financing of local law enforcement and a decades-long criminalization of Blackness. She also reveals tensions among Little's defenders and recovers Black women's intersectional politics of the period, which linked women's prison protest and antirape activism with broader struggles for economic and political justice.

Christina Greene is professor of African American studies at the University of Wisconsin–Madison and the author of Our Separate Ways: Women and the Black Freedom Movement in Durham, North Carolina.
For more information about Christina Greene, visit the Author Page.

"This is a hugely important book by a veteran historian of civil rights and women's activism. It is never easy to highlight and seriously engage with the voices and ideas of the most marginalized among us—and certainly incarcerated women of color fit that rubric. Greene does it here with insight, grace, and love. And it is extremely moving to read."—Annelise Orleck, author of Common Sense and a Little Fire: Women and Working-Class Politics in the United States, 1900–1965

“Joan Little’s self-defense case unfolded at the epicenter of the histories of women’s rights, the criminal legal system, and Black liberation struggles. Christina Greene’s painstaking research reveals how Joan Little and Black women like her have triumphed against unspeakable violence, punitive laws, and incarceration in order to create a more just world.  This book is a triumph.”—Ashley D. Farmer, author of Remaking Black Power: How Black Women Transformed an Era