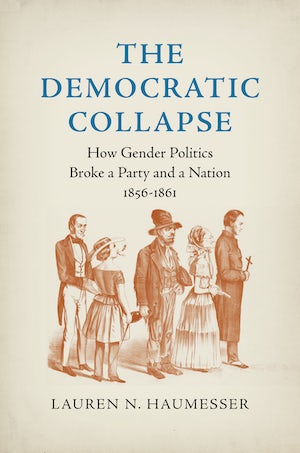 This fresh examination of antebellum politics comprehensively examines the ways that gender issues and gendered discourse exacerbated fissures within the Democratic Party in the critical years between 1856 and 1861. Whereas the cultural politics of gender had bolstered Democratic unity through the 1850s, the Lecompton crisis and John Brown's raid revealed that white manhood and its association with familial and national protection meant disparate—and ultimately incompatible—things in free and slave society. In fierce debates over the extension of slavery, gendered rhetoric hardened conflicts that ultimately led to the outbreak of the Civil War.

Lauren Haumesser here traces how northern and southern Democrats and their partisan media organs used gender to make powerful arguments about slavery as the sectional crisis grew, from the emergence of the Republican Party to secession. Gendered charges and countercharges turned slavery into an intractable cultural debate, raising the stakes of every dispute and making compromise ever more elusive.

"The 1860 presidential campaign was conducted in heavily gendered terms. Haumesser shows this was not a sudden, exaggerated reaction by Democrats to the threat of a Republican president. Instead, all of the purple prose and over-the-top political cartoons depicting Lincoln as a tool of feminists and abolitionists emerged from rifts within the Democratic Party during the sectional crisis."—Judith Giesberg, Villanova University