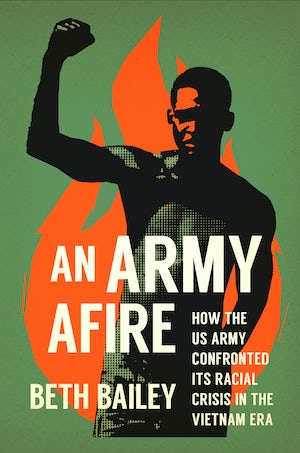 Hardcover Available May 2023, but pre-order your copy today!

To purchase online via an independent bookstore, visit Bookshop.org
By the late 1960s, what had been widely heralded as the best qualified, best-trained army in US history was descending into crisis as the Vietnam War raged without end. Morale was tanking. AWOL rates were rising. And in August 1968, a group of Black soldiers seized control of the infamous Long Binh Jail, burned buildings, and beat a white inmate to death with a shovel. The days of "same mud, same blood" were over, and a new generation of Black GIs had decisively rejected the slights and institutional racism their forefathers had endured.

As Black and white soldiers fought in barracks and bars, with violence spilling into surrounding towns within the US and in West Germany, Vietnam, South Korea, and Japan, army leaders grew convinced that the growing racial crisis undermined the army’s ability to defend the nation. Acclaimed military historian Beth Bailey shows how the US Army tried to solve that racial crisis (in army terms, “the problem of race”). Army leaders were surprisingly creative in confronting demands for racial justice, even willing to challenge fundamental army principles of discipline, order, hierarchy, and authority. Bailey traces a frustrating yet fascinating story, as a massive, conservative institution came to terms with demands for change.

Beth Bailey is a Foundation Distinguished Professor of History at the University of Kansas.


For more information about Beth Bailey, visit the Author Page.

An Army Afire is a groundbreaking book by one of America's best military historians. Drawing on an impressive array of untapped sources, Beth Bailey has crafted an incisive history of the racial conflicts that raged during the Vietnam War era. By exploring this "war within the war," Bailey highlights the stories of dozens of Black soldiers who reshaped the US Army from the inside. This is a first-rate institutional and cultural history of a turning point for both the military and the nation. —Matthew Delmont, Distinguished Professor of History at Dartmouth and author of Half American: The Epic Story of African Americans Fighting World War II at Home and Abroad

“Bailey has written a book of tremendous importance that has the potential to become the definitive study on race and the American military during the Vietnam era. She has a wonderful gift for storytelling and infuses what could be a traditional institutional study with life and emotion.” –Chad Williams, author of The Wounded World: W. E. B. Du Bois and the First World War

“A truly phenomenal book by one of the nation’s leading historians at the top of her game.” –Gregory A. Daddis, author of Pulp Vietnam: War and Gender in Cold War Men’s Adventure Magazines