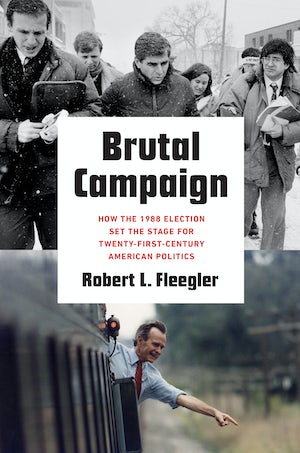 To purchase online via an independent bookstore, visit Bookshop.org
At 8:00 p.m. eastern standard time on election night 1988, NBC news anchor Tom Brokaw informed the country that they would soon know more about the outcome of “one of the longest, bloodiest presidential campaigns that anyone can remember.” It was a landslide victory for George H. W. Bush over Michael Dukakis, and yet Bush would serve only one term, forever overshadowed in history by the man who made him vice president, by the man who defeated him, and even by his own son. The 1988 presidential race quickly receded into history, but it was marked by the beginning of the modern political sex scandals, the first major African American presidential debate, the growing power of the religious right, and other key trends that came to define the elections that followed. Bush’s campaign tactics clearly illustrated the strategies and issues that allowed Republicans to control the White House for most of the 1970s and 1980s, and the election set the stage for the national political advent of both Joe Biden and Donald Trump.

Robert L. Fleegler’s narrative history of the 1988 election draws from untapped archival sources and revealing oral history interviews to uncover just how consequential this moment was for American politics. Identifying the seeds of political issues to come, Fleegler delivers an engaging review of an election that set a template for the political dynamics that define our lives to this day.

Robert L. Fleegler is associate professor of history at the University of Mississippi.

"A welcomed and refreshing corrective to the current historiography. This is good old-fashioned political history."—Steven M. Gillon, University of Oklahoma

"In a skillfully plotted blow-by-blow account of the well- and lesser-known facets of the 1988 presidential race, Fleegler contextualizes the election's infamous gaffes and ignominious events to reveal what they portended about the political dynamics of the late twentieth and early twenty-first centuries."—Lily Geismer, Claremont McKenna College