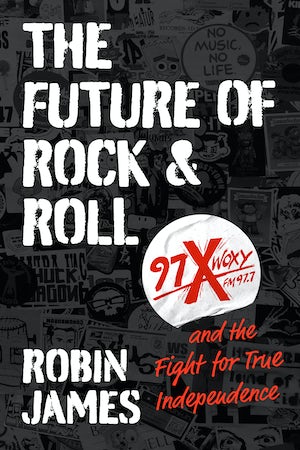 In 1983, an Ohio radio station called WOXY launched a sonic disruption to both corporate rock and to its conservative home region, programming an omnivorous range of genres and artists while being staunchly committed to local independent art and media. In the 1990s, as alternative rock went mainstream and radio grew increasingly homogeneous, WOXY gained international renown as one of Rolling Stone's "Last Great Independent Radio" stations. The station projected a philosophy that prioritized such independence—the idea that truly progressive, transgressive, futuristic disruptions of the status quo were possible only when practiced with and for other people.

In The Future of Rock and Roll, philosopher Robin James uses WOXY's story to argue against a corporate vision of independence—in which everyone fends for themselves—and in favor of an alternative way of thinking and relating to one another that disrupts norms but is nevertheless supported by communities. Against the standard retelling of the history of "modern rock," James looks to the local scenes that made true independence possible by freeing individual artists from the whims of the boardroom. This philosophy of community-rooted independence offers both a counternarrative to the orthodox history of indie rock and an alternative worldview to that of the current corporate mainstream.

Robin James is a writer, editor, and philosopher. She is author of four books including Resilience & Melancholy and The Sonic Episteme.


For more information about Robin James, visit the Author Page.

"Robin James writes with the analytical astuteness of an impassioned fan and the vision of a committed scholar to illustrate how a small radio station proffers a pathway of mutually supported independence, giving us a model for how to survive outside the realm of social and economic inequality bequeathed to us by four decades of neoliberalism and rapacious capitalism."—Barry Shank, Ohio State University

"Highly readable, entertaining, and edifying—Robin James has written what is at once a heartfelt tribute to a vanishing breed of American independent media and a trenchant critique of how the neoliberal economy has co-opted independence to essentially justify worker exploitation."—Theo Cateforis, Syracuse University