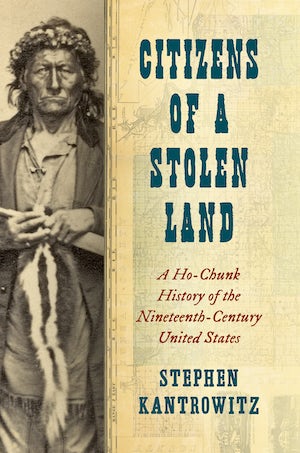 To purchase online via an independent bookstore, visit Bookshop.org
This concise and revealing history reconsiders the Civil War era by centering one Native American tribe's encounter with citizenship. In 1837, eleven years before Wisconsin's admission as a state, representatives of the Ho-Chunk people yielded under immense duress and signed a treaty that ceded their remaining ancestral lands to the U.S. government. Over the four decades that followed, as "free soil" settlement repeatedly demanded their further expulsion, many Ho-Chunk people lived under the U.S. government's policies of "civilization," allotment, and citizenship. Others lived as outlaws, evading military campaigns to expel them and adapting their ways of life to new circumstances. After the Civil War, as Reconstruction's vision of nonracial, national, birthright citizenship excluded most Native Americans, the Ho-Chunk who remained in their Wisconsin homeland understood and exploited this contradiction. Professing eagerness to participate in the postwar nation, they gained the right to remain in Wisconsin as landowners and voters while retaining their language, culture, and identity as a people.

This history of Ho-Chunk sovereignty and citizenship offer a bracing new perspective on citizenship's perils and promises, the way the broader nineteenth-century conflict between "free soil" and slaveholding expansion shaped Indigenous life, and the continuing impact of Native people's struggles and claims on U.S. politics and society.

Stephen Kantrowitz is Plaenert-Bascom and Vilas Distinguished Achievement Professor of History at the University of Wisconsin-Madison.
For more information about Stephen Kantrowitz, visit the Author Page.

"A much-needed intervention into the Indigenous history of North America and the history of the early American republic. For most people, Native history east of the Mississippi ends with removal, but Kantrowitz centers Indigenous people and nations within the story of westward expansion of the United States and reframes that expansion as a brutal struggle for control of Indigenous lands and a protracted contest to define the terms of inclusion and exclusion for Native peoples, white settlers, and free and enslaved Black people."—Michael Witgen, author of Seeing Red: Indigenous Land, American Expansion, and the Political Economy of Plunder in North America

"A sweeping history of the Civil War Era that moves outward from the Ho-Chunk homeland in today’s Wisconsin, placing Native peoples and settler colonialism in conversation with more familiar questions of slavery and emancipation. Citizens of a Stolen Land is an essential contribution. "—Kate Masur, author of Until Justice Be Done: America’s First Civil Rights Movement, from the Revolution to Reconstruction