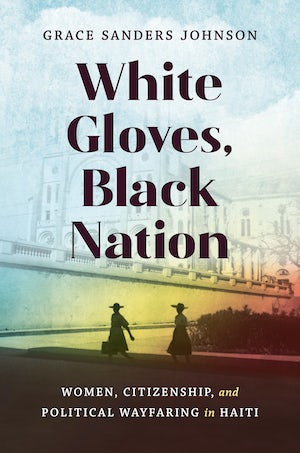 To purchase online via an independent bookstore, visit Bookshop.org
This ambitious transnational history considers Haitian women's political life during and after the United States occupation of Haiti (1915–34). The two decades following the occupation were some of the most politically dynamic and promising times in Haiti's modern history, but the history of women's political organizing in this period has received scant attention. Tracing elite and middle-class women's activism and intellectual practice from the countryside of Kenscoff, Haiti, to Philadelphia, the Belgian Congo, and back to Port-au-Prince, this book tells the story of Haitian women's essential role as co-curators of modern Haitian citizenship.

Set in a period when national belonging was articulated in philosophies of African authenticity, revolutionary nostalgia, and working-class politics, Grace Sanders Johnson considers how an emerging educated and professional class of women who understood themselves as descendants of the Haitian Revolution established alternative claims to citizenship that included, but were not limited to, suffrage and radicalism. Sanders Johnson argues that these women's political practice incorporated strategic class performance, extravagant sartorial sensibilities, and an insistence on self-promotion and preservation that challenged the exceptional trope of the martyred male revolutionary hero. Bringing her subjects vividly to life, she reveals their politics of wayfaring, moving deliberately if sometimes ineffectively through the radical milieu of the twentieth century.

"This is an incandescent work of scholarship—a brilliant, creative, original book that has much to offer people interested in the history of Black nationalism and the twentieth-century African diaspora, the contributions of women to those histories, and the ways political action is envisioned and expressed in how we live and move throughout the world."—Lara Putnam, University of Pittsburgh

"Sanders Johnson has written an innovative and much-needed history of Haitian women's political thought and organizing across national borders, challenging readers to rethink twentieth-century Haitian history and expand their understanding of Black feminisms, Black nationalisms, and Black women's role in defining what is socially and politically possible."—Brandon Byrd, Vanderbilt University

“Sanders Johnson’s meticulous research, attentive reading, and beautiful prose take readers on a journey through the political thought and activism of the Haitian women who sought to carve spaces for themselves within and beyond the nation.”--Annette Joseph-Gabriel, Duke University