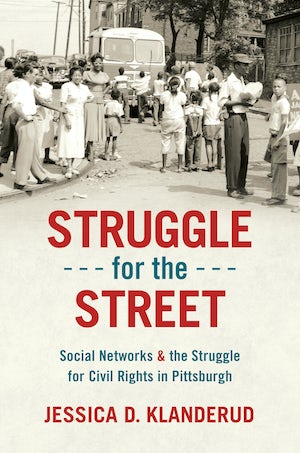 To purchase online via an independent bookstore, visit Bookshop.org
Cities are nothing without the streets—the arteries through which goods, people, and ideas flow. Neighborhood by neighborhood, block by block, the city streets are where politics begins. In Struggle for the Street, Jessica D. Klanderud documents the development of class-based visions of political, social, and economic equality in Pittsburgh's African American community between World War I and the early 1970s. Klanderud emphasizes how middle-class and working-class African Americans struggled over the appropriate uses and dominant meanings of street spaces in their neighborhoods as they collectively struggled to define equality.

In chapters that move from one community to the next, Klanderud tracks the transformation of tactics over time with a streets-eye view that reveals the coalescing alliances between neighbors and through space. Drawing on oral histories of neighborhood residents, Black newspapers, and papers from the NAACP and Urban League, this study reveals complex class negotiations in the struggle for civil rights at the street level.

"A compelling history of Black Pittsburgh communities that focuses on African Americans' engagements with, and class politics–infused conflicts around, the streets."—Clarence Lang, author of Grassroots at the Gateway: Class Politics and Black Freedom Struggle in St. Louis, 1936–75

"Jessica Klanderud takes us onto the city streets to tell an important story of how African Americans across class, gender and other boundaries fought for their rights in Pittsburgh. In her telling of this history, we encounter members of high society as well as petty capitalists, social protesters as well as purveyors of illegal activities, and working men and women as well as celebrities. This fascinating and historically rich read offers a significant contribution to African American history generally and African American urban history specifically."—Earl Lewis, author of In Their Own Interests: Race, Class and Power in Twentieth-Century Norfolk, Virginia