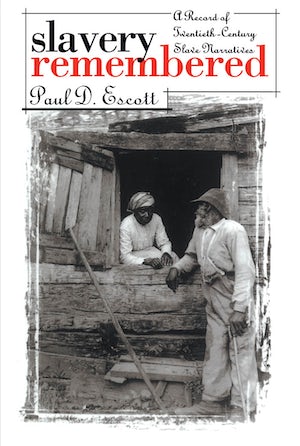 Slavery Remembered is the first major attempt to analyze the slave narratives gathered as part of the Federal Writers’ Project. Paul Escott’s sensitive examination of each of the nearly 2,400 narratives and his quantitative analysis of the narratives as a whole eloquently present the differing beliefs and experiences of masters and slaves. The book describes slave attitudes and actions; slave-master relationships; the conditions of slave life, including diet, physical treatment, working conditions, housing, forms of resistance, and black overseers; slave cultural institutions; status distinctions among slaves; experiences during the Civil War and Reconstruction; and the subsequent life histories of the former slaves.

An important contribution to the study of American slavery, Slavery Remembered is an ideal classroom text for American history surveys as well as more specialized courses.

Paul D. Escott, author of the award-winning Many Excellent People: Power and Privilege in North Carolina, 1850-1900, is Reynolds Professor of History at Wake Forest University and dean of the college.
For more information about Paul D. Escott, visit the Author Page.

"In this well-written, masterful examination of slave interviews, Paul Escott skillfully combines statistical and literary analyses. . . . The study is distinguished by its analytical sophistication [and] by its comparisons of black life and culture in bondage and quasi-freedom."--John W. Blassingame, Yale University