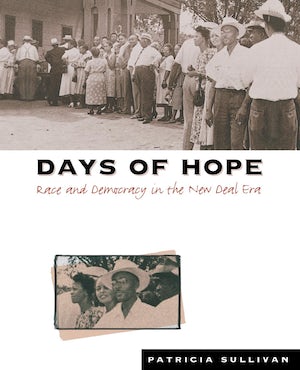 In the 1930s and 1940s, a loose alliance of blacks and whites, individuals and organizations, came together to offer a radical alternative to southern conservative politics. In Days of Hope, Patricia Sullivan traces the rise and fall of this movement. Using oral interviews with participants in this movement as well as documentary sources, she demonstrates that the New Deal era inspired a coalition of liberals, black activists, labor organizers, and Communist Party workers who sought to secure the New Deal's social and economic reforms by broadening the base of political participation in the South. From its origins in a nationwide campaign to abolish the poll tax, the initiative to expand democracy in the South developed into a regional drive to register voters and elect liberals to Congress. The NAACP, the CIO Political Action Committee, and the Southern Conference for Human Welfare coordinated this effort, which combined local activism with national strategic planning. Although it dramatically increased black voter registration and led to some electoral successes, the movement ultimately faltered, according to Sullivan, because the anti-Communist fervor of the Cold War and a militant backlash from segregationists fractured the coalition and marginalized southern radicals. Nevertheless, the story of this campaign invites a fuller consideration of the possibilities and constraints that have shaped the struggle for racial democracy in America since the 1930s.

Patricia Sullivan is a fellow at the W. E. B. Du Bois Institute for Afro-American Research at Harvard University.
For more information about Patricia Sullivan, visit the Author Page.

“A first-rate narrative of New Deal liberalism and its aftermath from 1933 to 1948. Her study breaks new ground in an important way by pushing “the start” of the Civil Rights movement back to the 1930s, long before the traditional date of 1954.”--Alabama Review

"Patricia Sullivan offers fresh perspectives on the strengths and limitations of the New Deal at the local and national levels, the changing complexion of the Democratic party, and the roles of those social activists determined to bring social and economic justice to a region not noted for either democracy or racial tolerance. Days of Hope is a graceful addition to New Deal, southern, and civil rights historiography."--American Studies

“A splendid book. It inspires optimism rather than despair by reminding us that social justice is achieved, not simply through politicians and policy makers, but through grass-roots political mobilization."--Journal of American History

"Although the case for a racially progressive New Deal has been made before, . . . it has never been argued with more force or originality than in Days of Hope. . . . In arguing that the Southern civil rights struggle from 1938 to 1948 yielded a distinctive era of progress, Days of Hope gives the prewar, wartime and postwar history of race and liberalism a coherence missing from most accounts. . . . Days of Hope does much to deepen our understanding of the civil rights movement and the New Deal. It is a testament to Sullivan's boldness that she seeks not merely to illuminate the New Deal era but also to redefine it--and to a remarkable extent she succeeds."--Nation

"In its attention to the fluidity, radical potential, and reservoir of dissent which existed beneath a rigged political system, Sullivan's book is a compelling challenge to easy generalizations about the Solid South. Its greatest contribution is the chronicling of Southerners who knew that their region had to change from within and knew that federal intervention was also a prerequisite, a lesson which still resonates today."--Southern Changes