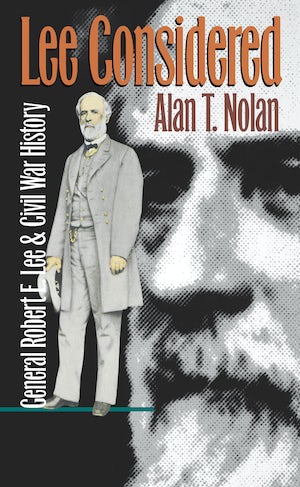 Of all the heroes produced by the Civil War, Robert E. Lee is the most revered and perhaps the most misunderstood. Lee is widely portrayed as an ardent antisecessionist who left the United States Army only because he would not draw his sword against his native Virginia, a Southern aristocrat who opposed slavery, and a brilliant military leader whose exploits sustained the Confederate cause.

Alan Nolan explodes these and other assumptions about Lee and the war through a rigorous reexamination of familiar and long-available historical sources, including Lee's personal and official correspondence and the large body of writings about Lee. Looking at this evidence in a critical way, Nolan concludes that there is little truth to the dogmas traditionally set forth about Lee and the war.

Alan T. Nolan, an Indianapolis lawyer, is author of The Iron Brigade, a military history, and As Sounding Brass, a novel.
For more information about Alan T. Nolan, visit the Author Page.

"This book will change our perception of the South's premier icon. With a deft pen and a sure grasp of the essential questions, Alan Nolan separates the Lee of reality from the Lee of mythology. No student of the Civil War can afford to ignore the challenging and controversial conclusions of this study."--James M. McPherson, author of the Pulitzer Prize-winning Battle Cry of Freedom: The Era of the Civil War

"Nolan dethrones the myth of 'the Marble Man' with meticulous research."--New Republic

"Any future author dealing with Lee will have to face up to Nolan's material and we will all be the better for it."--Washington Post

"General readers as well as Civil War buffs will enjoy serving as the jury for Mr. Nolan's case, evaluating the documents and incidents he presents as evidence for his conclusions. His argument is a persuasive one, artfully fashioned to stimulate the critical assessment he seeks."--New York Times Book Review

"Alan Nolan has rendered an invaluable service in training a judicious lens on various elements of the traditional interpretation of Robert E. Lee. Was Lee a reluctant convert to secession? Did he oppose the institution of slavery? Did he abhor war, hold no bitterness toward his northern opponents, and urge reconciliation after Appomattox? Did Lee's record on the battlefield justify his towering military reputation? Nolan's rigorous examination of the evidence suggests answers that cannot be dismissed lightly and certainly will provoke controversy. Lee Considered should be required reading for anyone who would understand the Confederacy's most famous soldier."--Gary W. Gallagher