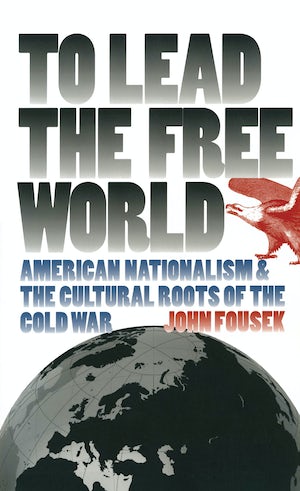 In this cultural history of the origins of the Cold War, John Fousek argues boldly that American nationalism provided the ideological glue for the broad public consensus that supported U.S. foreign policy in the Cold War era. From the late 1940s through the late 1980s, the United States waged cold war against the Soviet Union not primarily in the name of capitalism or Western civilization--neither of which would have united the American people behind the cause--but in the name of America.

Through close readings of sources that range from presidential speeches and popular magazines to labor union debates and the African American press, Fousek shows how traditional nationalist ideas about national greatness, providential mission, and manifest destiny influenced postwar public culture and shaped U.S. foreign policy discourse during the crucial period from the end of World War II to the beginning of the Korean War. Ultimately, he says, in the atmosphere created by apparently unceasing international crises, Americans rallied around the flag, eventually coming to equate national loyalty with global anticommunism and an interventionist foreign policy.

John Fousek is clinical associate professor in the program in international relations at New York University.
For more information about John Fousek, visit the Author Page.

"This is a complex, thoughtful, and well-crafted work, in which the author traces the development in the 1940s of what he labels 'American nationalist globalism.' . . . Fousek has provided a sophisticated portrait of postwar American nationalism and the way in which it informed elite and public thought on U.S. foreign policy during the Cold War."--Historian

"A lucid, well researched, and tightly argued book that is a significant contribution to the debate concerning American popular cultural attitudes and the start of the cold war."--Political Science Quarterly

"This is a highly thought-provoking book that offers a number of debatable arguments. . . . This volume fulfills precisely the requirement of a good book. It raises more questions that it can answer and decenters the political analysis of Cold War propaganda."--American Historical Review

"Well-researched and capably argued in an interesting fashion."--Journal of Cold War Studies

"John Fousek's To Lead the Free World incisively examines the way 'the Cold War consensus' was constructed in America. Fousek's treatment of mass-print sources, including advertising, is particularly valuable. He also probes the subtle interpenetration of global issues and domestic policy, and the way major civil-rights and labor organizations adapted to the anticommunist ideological currents of the day. Anyone interested in postwar U.S. foreign policy, social history, and mass culture should read this book."--Paul Boyer, University of Wisconsin-Madison