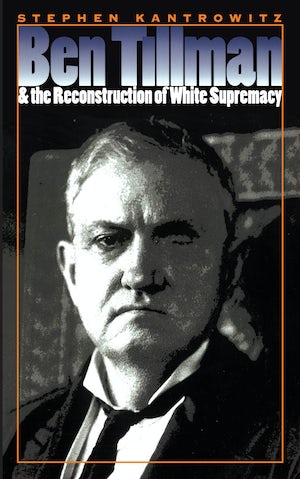 A Chicago Tribune Choice Selection of 2000

Through the life of Benjamin Ryan Tillman (1847-1918), South Carolina's self-styled agrarian rebel, this book traces the history of white male supremacy and its discontents from the era of plantation slavery to the age of Jim Crow.

As an anti-Reconstruction guerrilla, Democratic activist, South Carolina governor, and U.S. senator, Tillman offered a vision of reform that was proudly white supremacist. In the name of white male militance, productivity, and solidarity, he justified lynching and disfranchised most of his state's black voters. His arguments and accomplishments rested on the premise that only productive and virtuous white men should govern and that federal power could never be trusted. Over the course of his career, Tillman faced down opponents ranging from agrarian radicals to aristocratic conservatives, from woman suffragists to black Republicans. His vision and his voice shaped the understandings of millions and helped create the violent, repressive world of the Jim Crow South.

Friend and foe alike--and generations of historians--interpreted Tillman's physical and rhetorical violence in defense of white supremacy as a matter of racial and gender instinct. This book instead reveals that Tillman's white supremacy was a political program and social argument whose legacies continue to shape American life.

"Kantrowitz's major achievements [are] in relocating Tillman in the southern social structure, and in underscoring the violence that he and his ilk used to regain political ascendency after the Civil War."--American Historical Review

"Kantrowitz has written an interesting, elequent, and important study of Ben Tillman and his vision of white supremacy. . . . When other scholars revisit the other architects of postbellum white supremacy, they necessarily will begin with Kantrowitz's impressive study."--Journal of Southern History

"Kantrowitz's excellent new book is a study of Tillman's thinking on white supremacy and patriarchy. It is also a look at the environment that spawned such ideas: the South Carolina of the late-nineteenth and early-twentieth centuries."--Review of Politics

"This is state-of-the-art political history. . . . Kantrowitz's biography of South Carolina's leading political figure in the age of populism, disfranchisement, and lynching is exceptional for the depth of its understanding of the period, its ever more nuanced interpretations, and especially its intricate narrative about the changing meanings of white supremacy. . . . If this book is indeed state-of-the-art, the art of political history today is in good shape."--North Carolina Historical Review

"Stephen Kantrowitz's new book merits serious attention. Based on broad research in primary sources, including an impressive array of manuscript collections, it has immense strengths. Most important, Kantrowitz takes Tillman seriously, recognizing that he was far more than some country rube and race baiter. . . . I commend Professor Kantrowitz for giving us a first-rate book."--Journal of American History

"A thoughtful biography of one of the archracists and pillars of Jim Crow in the post-Reconstruction South."--New York Times Book Review