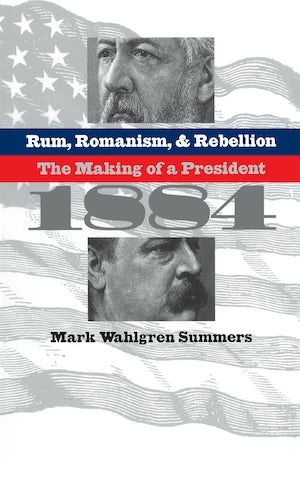 To purchase online via an independent bookstore, visit Bookshop.org
The presidential election of 1884, in which Grover Cleveland ended the Democrats' twenty-four-year presidential drought by defeating Republican challenger James G. Blaine, was one of the gaudiest in American history, remembered today less for its political significance than for the mudslinging and slander that characterized the campaign. But a closer look at the infamous election reveals far more complexity than previous stereotypes allowed, argues Mark Summers. Behind all the mud and malarkey, he says, lay a world of issues and consequences.

Summers suggests that both Democrats and Republicans sensed a political system breaking apart, or perhaps a new political order forming, as voters began to drift away from voting by party affiliation toward voting according to a candidate's stand on specific issues. Mudslinging, then, was done not for public entertainment but to tear away or confirm votes that seemed in doubt. Uncovering the issues that really powered the election and stripping away the myths that still surround it, Summers uses the election of 1884 to challenge many of our preconceptions about Gilded Age politics.

“[An] exhaustive discussion of the campaign of 1884.”--RALPH

"Summers's special contribution to revisionism is that he demonstrates how even the election of 1884 fits into a revisionist framework. . . . Anyone wishing to understand the broader context behind those stories will find Summers's analysis of great value."--Labor History

"Written with gusto and peppered with insights, this is old-fashioned political history at its best."--American Historical Review

"Summers is especially informative in his analysis of the attempts by the Republicans and Democrats to exploit third parties such as the Prohibitionists and Greenbackers to further their own electoral chances. . . . Deeply researched and presented in a colorful narrative style, this is a work that ranks with Geoffrey Blodgett's The Gentle Reformers (1966) and Robert Marcus's Grand Old Party (1971) for the revealing window that it opens on Gilded Age politics."--North Carolina Historical Review

"Those seeking an introduction to the business of politics in the 1880s will find pithy quotations, good coverage of the scandals of the campaign, and a wealth of information on Republicans and Democrats."--The Journal of American History

"[An] interesting and ably argued book."--Pennsylvania Magazine of History and Biography