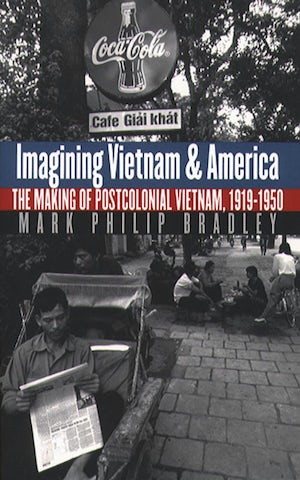 In this study of the encounter between Vietnam and the United States from 1919 to 1950, Mark Bradley fundamentally reconceptualizes the origins of the Cold War in Vietnam and the place of postcolonial Vietnam in the history of the twentieth century. Among the first Americans granted a visa to undertake research in Vietnam since the war, Bradley draws on newly available Vietnamese-language primary sources and interviews as well as archival materials from France, Great Britain, and the United States.

Bradley uses these sources to reveal an imagined America that occupied a central place in Vietnamese political discourse, symbolizing the qualities that revolutionaries believed were critical for reshaping their society. American policymakers, he argues, articulated their own imagined Vietnam, a deprecating vision informed by the conviction that the country should be remade in America's image.

Contrary to other historians, who focus on the Soviet-American rivalry and ignore the policies and perceptions of Vietnamese actors, Bradley contends that the global discourse and practices of colonialism, race, modernism, and postcolonial state-making were profoundly implicated in--and ultimately transcended--the dynamics of the Cold War in shaping Vietnamese-American relations.

"Bradley. . . draw[s] on Vietnamese-language sources to an extraordinary degree--and in the process turns up information that may surprise many of his American readers. . . . Bradley's effort to place American-Vietnamese relations in a broader context is welcome."--New York Times Book Review

"This book will stand tall among the many studies examining the relations between the United States and Vietnam."--American Historical Review

"This book is a rare and wonderful thing: a study of United States-Vietnam relations that says new things in new ways. . . . As perceptive a study of the roots of the Vietnam conflict as we are likely to get."--Journal of American History

"This insightful book explains better than any work thus far why Americans believed they could replace the French without inheriting the stigma of colonialism and, despite France's disastrous experience, succeed militarily against the Viet Cong . . . . Those who believe that culture matters in international relations will find much support for their arguments in this brief but significant work."--Political Science Quarterly

"Bradley scrupulously analyzes the scholarship of the postcolonial period of Vietnam's turbulent history and the cataclysmic events that followed."--Library Journal