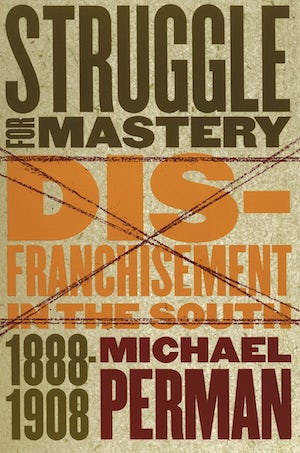 Around 1900, the southern states embarked on a series of political campaigns aimed at disfranchising large numbers of voters. By 1908, Alabama, Arkansas, Georgia, Louisiana, Mississippi, North Carolina, South Carolina, Tennessee, Texas, and Virginia had succeeded in depriving virtually all African Americans, and a large number of lower-class whites, of the voting rights they had possessed since Reconstruction--rights they would not regain for over half a century.

Struggle for Mastery is the most complete and systematic study to date of the history of disfranchisement in the South. After examining the origins and objectives of disfranchisement, Michael Perman traces the process as it unfolded state by state. Because he examines each state within its region-wide context, he is able to identify patterns and connections that have previously gone unnoticed. Broadening the context even further, Perman explores the federal government's seeming acquiescence in this development, the relationship between disfranchisement and segregation, and the political system that emerged after the decimation of the South's electorate. The result is an insightful and persuasive interpretation of this highly significant, yet generally misunderstood, episode in U.S. history.

Michael Perman is Research Professor in the Humanities at the University of Illinois at Chicago. His books include Emancipation and Reconstruction, 1862-1879 and the award-winning Road to Redemption: Southern Politics, 1869-1879.
For more information about Michael Perman, visit the Author Page.

"This book is the definitive account of how the disfranchisers disenfranchised."--American Historical Review

"[Perman] has cleared the way for fresh investigations into this very vexed period."--Historian

"Perman's volume is surely the fullest narrative we will ever have of the legal, constitutional, and political mechanics of disfranchisement. . . . Thoroughly researched, clearly considered, and illustrated with state maps and pictures of frowning white politicians, this work is monumentally solid."--Civil War History

"By far the most thorough examination of disfranchisement yet produced, and the amount of new detail is impressive."--Southern Historian

"An extremely useful study. . . . Struggle for Mastery may be read partially or completely but always profitably. It will take its place instantly as the standard treatment of the subject."--Journal of American History