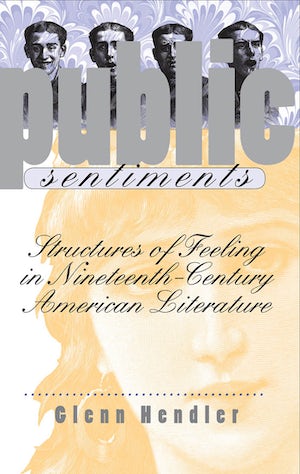 In this book, Glenn Hendler explores what he calls the "logic of sympathy" in novels by Walt Whitman, Louisa May Alcott, T. S. Arthur, Martin Delany, Horatio Alger, Fanny Fern, Nathaniel Parker Willis, Henry James, Mark Twain, and William Dean Howells. For these nineteenth-century writers, he argues, sympathetic identification was not strictly an individual, feminizing, and private feeling but the quintessentially public sentiment--a transformative emotion with the power to shape social institutions and political movements.

Uniting current scholarship on gender in nineteenth-century American culture with historical and theoretical debates on the definition of the public sphere in the period, Hendler shows how novels taught diverse readers to "feel right," to experience their identities as male or female, black or white, middle or working class, through a sentimental, emotionally based structure of feeling. He links novels with such wide-ranging cultural and political discourses as the temperance movement, feminism, and black nationalism. Public Sentiments demonstrates that, whether published for commercial reasons or for higher moral and aesthetic purposes, the nineteenth-century American novel was conceived of as a public instrument designed to play in a sentimental key.

Glenn Hendler, assistant professor of English at the University of Notre Dame, is coeditor of Sentimental Men: Masculinity and the Politics of Affect in American Culture.
For more information about Glenn Hendler, visit the Author Page.

"Offers many fascinating insights into nineteenth-century American literature and culture. Hendler's readings of classic and lesser-known texts are invariably creative, sophisticated and erudite."--Journal of the Early Republic

"Although recent books . . . have opened up aspects of the 'cultural work' of American writing, Hendler offers further and specific insight into the subject."--Choice

"Public Sentiments makes a cogent, eloquent, and forceful contribution to studies of sentimentalism and culture in American literary studies."--American Literature

"Glenn Hendler's book is a fine contribution to the scholarship of literary sentimentalism."--Nineteenth-Century Literature

"Sophisticated, yet lively and readable, Public Sentiments will be useful to those readers interested in how sentiment shaped public identities and institutions in nineteenth-century America; especially valuable is its emphasis on the masculine experience of affect."--South Atlantic Review

"Public Sentiments tells what sentimentality does and theorizes why it is so central to understanding the logics of individual and cultural identification. In this full-scale account of male sentiment and the limits of female sympathy, Hendler analyzes with imagination and wit how we can gauge the nineteenth-century significance of sentimentality. It is a remarkably lucid, forceful book."--Dale M. Bauer, University of Kentucky