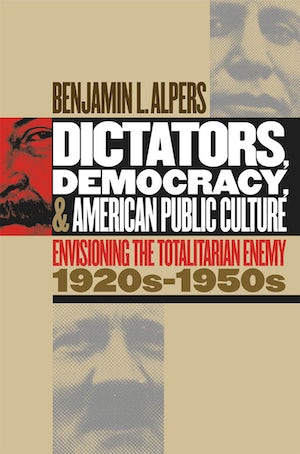 Focusing on portrayals of Mussolini's Italy, Hitler's Germany, and Stalin's Russia in U.S. films, magazine and newspaper articles, books, plays, speeches, and other texts, Benjamin Alpers traces changing American understandings of dictatorship from the late 1920s through the early years of the Cold War.

During the early 1930s, most Americans' conception of dictatorship focused on the dictator. Whether viewed as heroic or horrific, the dictator was represented as a figure of great, masculine power and effectiveness. As the Great Depression gripped the United States, a few people--including conservative members of the press and some Hollywood filmmakers--even dared to suggest that dictatorship might be the answer to America's social problems.

In the late 1930s, American explanations of dictatorship shifted focus from individual leaders to the movements that empowered them. Totalitarianism became the image against which a view of democracy emphasizing tolerance and pluralism and disparaging mass movements developed. First used to describe dictatorships of both right and left, the term "totalitarianism" fell out of use upon the U.S. entry into World War II. With the war's end and the collapse of the U.S.-Soviet alliance, however, concerns about totalitarianism lay the foundation for the emerging Cold War.

Benjamin L. Alpers is Reach for Excellence Associate Professor in the Honors College and associate professor of history and film and video studies at the University of Oklahoma.
For more information about Benjamin L. Alpers, visit the Author Page.

"[This] masterly study of the historical dimensions of this process of polarization is to be welcomed. . . . It is the kind of history that can revitalize our interest in ideas and events that we had long thought we understood."--International History Review

"Will gladden the hearts of anyone interested in communication history during critical periods in the 20th century. . . . A unique contribution to American political and cultural history."--Political Communication

"Alpers' timely book. . . . has some fresh sources and some new things to say."--The New Yorker

"Well-written and clearly argued. . . . A stimulating and intelligent account."--War in History

"Alpers has made visible an important aspect of American intellectual history in the twentieth century. . . . [He] convincingly delineates an exciting intellectual history that has Orson Welles and Charlie Chaplin converse with Arthur Schlesinger, Jr., and Joseph Schumpeter."--American Historical Review

"A first-rate book. Others have told parts of this story, but no one has put it all together as Alpers does. By considering dictatorship generally, he effectively links the response to particular dictatorships that others have considered separately, and by cutting across the divide between elite and popular culture, he brings together and further illuminates material that others have treated in isolation. His readings of oft-analyzed texts such as George Orwell's 1984 and Hannah Arendt's Origins of Totalitarianism are illuminating and fresh, and he brings to light a good deal of less familiar source material."--Robert Westbrook, University of Rochester