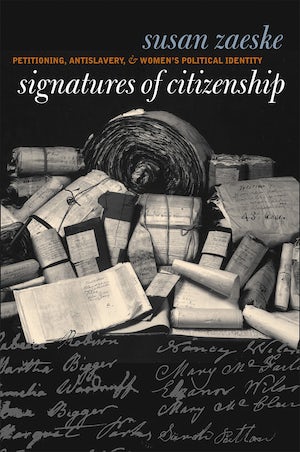 In this comprehensive history of women's antislavery petitions addressed to Congress, Susan Zaeske argues that by petitioning, women not only contributed significantly to the movement to abolish slavery but also made important strides toward securing their own rights and transforming their own political identity.

By analyzing the language of women's antislavery petitions, speeches calling women to petition, congressional debates, and public reaction to women's petitions from 1831 to 1865, Zaeske reconstructs and interprets debates over the meaning of female citizenship. At the beginning of their political campaign in 1835 women tended to disavow the political nature of their petitioning, but by the 1840s they routinely asserted women's right to make political demands of their representatives. This rhetorical change, from a tone of humility to one of insistence, reflected an ongoing transformation in the political identity of petition signers, as they came to view themselves not as subjects but as citizens. Having encouraged women's involvement in national politics, women's antislavery petitioning created an appetite for further political participation that spurred countless women after the Civil War and during the first decades of the twentieth century to promote causes such as temperance, anti-lynching laws, and woman suffrage.

Susan Zaeske is associate professor of rhetoric at the University of Wisconsin-Madison.
For more information about Susan Zaeske, visit the Author Page.

"Build[s] on the insights of pioneering historians . . . while also adding significantly to the findings of recent historians."--Journal of American History

"An admirable study of a significant activity in the history of 19th century reform movements."--Civil War Book Review

"A compelling portrait of the anti-slavery petition campaigns of the nineteenth century and their impact on women's political identities. Zaeske convincingly demonstrates that women's participation in the petition drives both contributed to the success of abolition and transformed women's political identity from one rooted in localities and religious duty to one of national citizenship and natural rights."--Civil War History

"Comprehensive. . . . This is a solid contribution and should be an essential read for anyone interested in ideas of citizenship and history."--Journal of Church and State