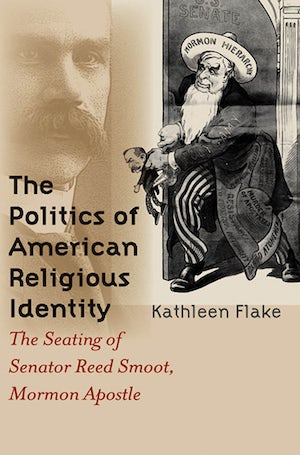 Between 1901 and 1907, a broad coalition of Protestant churches sought to expel newly elected Reed Smoot from the Senate, arguing that as an apostle in the Church of Jesus Christ of Latter-day Saints, Smoot was a lawbreaker and therefore unfit to be a lawmaker. The resulting Senate investigative hearing featured testimony on every peculiarity of Mormonism, especially its polygamous family structure. The Smoot hearing ultimately mediated a compromise between Progressive Era Protestantism and Mormonism and resolved the nation's long-standing "Mormon Problem." On a broader scale, Kathleen Flake shows how this landmark hearing provided the occasion for the country--through its elected representatives, the daily press, citizen petitions, and social reform activism--to reconsider the scope of religious free exercise in the new century.

Flake contends that the Smoot hearing was the forge in which the Latter-day Saints, the Protestants, and the Senate hammered out a model for church-state relations, shaping for a new generation of non-Protestant and non-Christian Americans what it meant to be free and religious. In addition, she discusses the Latter-day Saints' use of narrative and collective memory to retain their religious identity even as they changed to meet the nation's demands.

"This highly informative and enjoyable book may appeal equally to both scholars and readers interested in American political or religious history in general and Mormon studies in particular."--Nova Religio

"[This] sharp, short book not only reinterprets the transition [to modernity] but also suggests a general proposition about religious and political authority in modern America. The Politics of American Religious Identity will have a wide readership."--Journal of American History

"Flake knows the power of narrative. She is steeped in the practice of law and in the study of constitutional history, religion, feminist theory, ritual, and identity formation. No more sophisticated mind has turned its attention to the history of the Latter-day Saints."--American Historical Review

"The first book-length account of the trial . . . an important study--wide-ranging, deeply researched, and full of insight."--Western Historical Quarterly

"Flake tells a little-known yet very important story about the development of American pluralism. . . . [Smoot] deserves national affection, as the central figure in a key incident in the growth of religious tolerance in the United States."--National Review