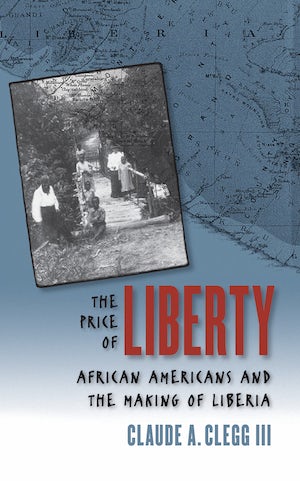 In nineteenth-century America, the belief that blacks and whites could not live in social harmony and political equality in the same country led to a movement to relocate African Americans to Liberia, a West African colony established by the United States government and the American Colonization Society in 1822. In The Price of Liberty, Claude Clegg accounts for 2,030 North Carolina blacks who left the state and took up residence in Liberia between 1825 and 1893. By examining both the American and African sides of this experience, Clegg produces a textured account of an important chapter in the historical evolution of the Atlantic world.

For almost a century, Liberian emigration connected African Americans to the broader cultures, commerce, communication networks, and epidemiological patterns of the Afro-Atlantic region. But for many individuals, dreams of a Pan-African utopia in Liberia were tempered by complicated relationships with the Africans, whom they dispossessed of land. Liberia soon became a politically unstable mix of newcomers, indigenous peoples, and "recaptured" Africans from westbound slave ships. Ultimately, Clegg argues, in the process of forging the world's second black-ruled republic, the emigrants constructed a settler society marred by many of the same exclusionary, oppressive characteristics common to modern colonial regimes.

Claude A. Clegg III is associate professor of history at Indiana University at Bloomington. He is author of An Original Man: The Life and Times of Elijah Muhammad.
For more information about Claude Andrew Clegg III, visit the Author Page.

"Clegg . . . reveal[s] how cherished myths about Africa and America ran aground on the shoals of political and cultural realities."--The Chronicle of Higher Education

"An engaging and thoroughly researched account of how just over 2,000 North Carolinian blacks left for Africa between 1820 and 1893 and of the role they played in the establishment of the nascent state of Liberia. . . . Brilliant."--Diaspora

"This book about the black North Carolinian's emigration to Liberia is an excellent inquiry into the socioeconomic life of a people, who until now, seem to have had no history."--International Journal of African Historical Studies

"Elegantly written and extensively documented with Liberian and North Carolinian archival materials, Clegg offers a fascinating view of the origins of Liberia as well as some intriguing clues to its current dilemmas."--Foreign Affairs