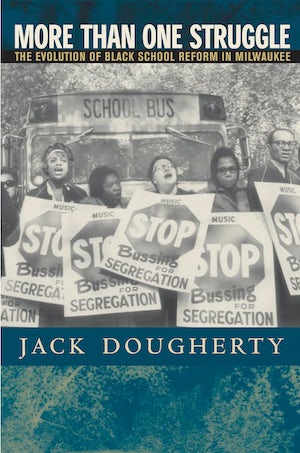 Dougherty tells the story of black school reform movements in Milwaukee from the 1930s to the 1990s, highlighting the multiple perspectives within each generation. In profiles of four leading activists, he reveals how different generations redefined the meaning of the Brown decision over time to fit the historical conditions of their particular struggles. William Kelley of the Urban League worked to win teaching jobs for blacks and to resettle Southern black migrant children in the 1950s; Lloyd Barbee of the NAACP organized protests in support of integrated schools and the teaching of black history in the 1960s; and Marian McEvilly and Howard Fuller contested--in different ways--the politics of implementing desegregation in the 1970s, paving the way for the 1990s private school voucher movement. Dougherty concludes by contrasting three interpretations of the progress made in the fifty years since Brown, showing how historical perspective can shed light on contemporary debates over race and education reform.

Jack Dougherty is assistant professor and director of educational studies at Trinity College in Hartford, Connecticut.
For more information about Jack Dougherty, visit the Author Page.

"The distinctiveness of this clearly written, well organized volume is in the way it weaves together various campaigns for educational equity as different manifestations of an ongoing concern. . . . Dougherty's valuable and exhaustively researched book should find a place in comprehensive collections on civil rights and school integration."--Choice

"A rich picture of black activism in Milwaukee. . . . Dougherty effectively broadened the cast of historical players and presents new insights on the motivations, ideologies, and strategies of civil rights activists in the urban North."--Ohio History

"Dougherty [feels] viewing the history of African American education solely in terms of the almost mythic Brown decision slights the length and complexity of the struggles for access to public education. . . . When historians focus on a landmark like Brown v. Board, they may neglect the details of the civil rights struggle in specific communities. Whether you lived through the period or not, therefore, the scope of Dougherty's narrative is especially satisfying."--Wisconsin Magazine of History

"More Than One Struggle is a model study of twentieth-century urban school reform movements. Unlike so many existing treatments of the civil rights era, Jack Dougherty convincingly argues that these movements entailed ongoing, multifaceted, and highly contested processes of historical change and memory. In his view, each successive campaign--for black public school teachers, integrated classrooms, and neighborhood schools--developed its own blind spots and established the context for future conflicts."--Joe W. Trotter, Carnegie Mellon University