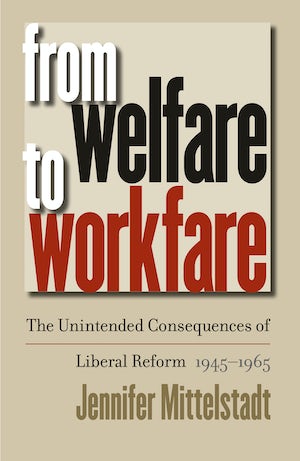 In 1996, Democratic president Bill Clinton and the Republican-controlled Congress "ended welfare as we know it" and trumpeted "workfare" as a dramatic break from the past. But, in fact, workfare was not new. Jennifer Mittelstadt locates the roots of the 1996 welfare reform many decades in the past, arguing that women, work, and welfare were intertwined concerns of the liberal welfare state beginning just after World War II.

Mittelstadt examines the dramatic reform of Aid to Dependent Children (ADC) from the 1940s through the 1960s, demonstrating that in this often misunderstood period, national policy makers did not overlook issues of poverty, race, and women's role in society. Liberals' public debates and disagreements over welfare, however, caused unintended consequences, she argues, including a shift toward conservatism. Rather than leaving ADC as an income support program for needy mothers, reformers recast it as a social services program aimed at "rehabilitating" women from "dependence" on welfare to "independence," largely by encouraging them to work. Mittelstadt reconstructs the ideology, implementation, and consequences of rehabilitation, probing beneath its surface to reveal gendered and racialized assumptions about the welfare poor and broader societal concerns about poverty, race, family structure, and women's employment.

"Well-organized. . . . Valuable. . . . . Will appeal to readers interested in women and poverty, reform and the policymaking process, the influence of economy on government, and the intricacies of federal welfare law."--Business History Review

"A subtly argued and convincing account of the ways in which liberal reformers like Wilbur Cohen and social work professionals . . . unwittingly participated in the ending of welfare payments and the substitution of work-based programs. . . . An excellent example of the ways in which careful historical research and writing can illuminate a very complicated and contentious issue."--Historian

"Mittelstadt's greatest strength is her persistent attention to sex and gender as variables that have shaped welfare politics. . . . From Welfare to Workfare definitely makes a contribution to the feminist history of public welfare in the United States."--Journal of American History

"[Mittelstadt] has tied up issues of race, gender, public policy, and modern American politics in a package far neater as history than as the reality we confront daily. . . . A major work that historians of law and policy, recent America, race or gender will find indispensable."--Law and History Review

"[From Welfare to Workforce: The Unintended Consequences of Liberal Reform] is an important contribution to the growing historiography of American social welfare history. . . . Mittelstadt's book serves as a strong reminder that the years from 1945 to 1965 were a significant period in the history of social welfare policy."--American Historical Review

"Mittelstadt's engaging book details a relatively uncharted chapter in the history of U.S. poverty policy."--Journal of Sociology and Social Welfare