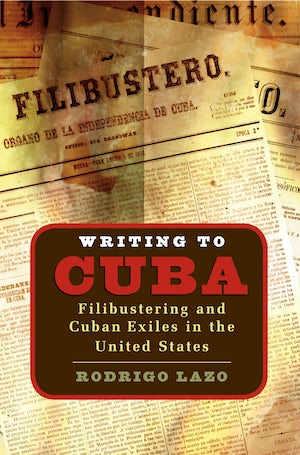 To purchase online via an independent bookstore, visit Bookshop.org
In the mid-nineteenth century, some of Cuba's most influential writers settled in U.S. cities and published a variety of newspapers, pamphlets, and books. Collaborating with military movements known as filibusters, this generation of exiled writers created a body of literature demanding Cuban independence from Spain and alliance with or annexation to the United States.

Drawing from rare materials archived in the United States and Havana, Rodrigo Lazo offers new readings of works by writers such as Cirilo Villaverde, Juan Clemente Zenea, Pedro Santacilia, and Miguel T. Tolón. Lazo argues that to understand these writers and their publications, we must move beyond nation-based models of literary study and consider their connections to both Cuba and the United States. Anchored by the publication of Spanish- and English-language newspapers in the United States, the transnational culture of writers Lazo calls los filibusteros went hand in hand with a long-standing economic flow between the countries and was spurred on by the writers' belief in the American promise of freedom and the hemispheric ambitions of the expansionist U.S. government. Analyzing how U.S. politicians, journalists, and novelists debated the future of Cuba, Lazo argues that the war of words carried out in Cuban-U.S. print culture played a significant role in developing nineteenth-century conceptions of territory, colonialism, and citizenship.

A former staff writer for the Miami Herald, Rodrigo Lazo is assistant professor in the Department of English and Comparative Literature at the University of California, Irvine.
For more information about Rodrigo Lazo, visit the Author Page.

"Informative and rewarding reading for scholars in both historical and literary fields."--New West Indian Guide

"A well-written, cogently argued book that packs an incredible amount of analysis into a short space. . . . An excellent book."--Cuban Studies

"Writing to Cuba. . . presents highly provocative and original research from rare source materials, with applications to many important subjects, including antebellum journalism, literature, ethnicity, romanticism, and gender. . . . Above all, Lazo contributes substantively to the emergent field of filibuster cultural studies."--Journal of American History

"The less-known material that Lazo draws on in Writing to Cuba is not only textual but highly ephemeral. . . . Lazo's book usefully reminds us that the antebellum rhetoric of manifest destiny was applied just as frequently to the proposed annexation of Cuba as it was to the former Mexican territories in the west."--American Literature

"A significant and much-needed study of the transnational print cultures of Cuban exiles in the United States during the middle of the nineteenth century. . . . The concrete and careful account of the specific conditions that enabled a nineteenth-century transnational print culture is especially illuminating, and Lazo's analysis of the strengths and limits of such a formation is a strong contribution to recent efforts to move beyond nation-based frames of analysis without forgetting the powerful full of the nation as form, for exiles and other in the nineteenth century and beyond."--Americas

"Lazo’s is the first and only complete study of the essays, periodical articles, poetry, and fiction of this important literary corpus, and it is the first study to suggest the new paradigm of transnationalism, a paradigm that can be applied to all of the writings of Hispanics in the United States. . . . It will make a strong contribution in the fields of Latin American studies and literature, cultural studies, Caribbean literature, and American studies. It is a model for the type of scholarship that needs to be conducted in recovering the historical and literary past."--Nicolás Kanellos, University of Houston