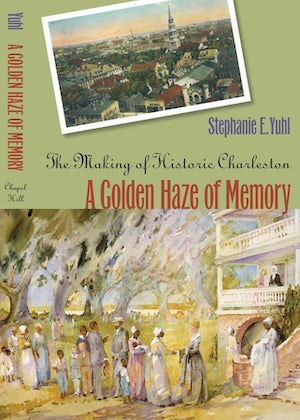 Charleston, South Carolina, today enjoys a reputation as a destination city for cultural and heritage tourism. In A Golden Haze of Memory, Stephanie E. Yuhl looks back to the crucial period between 1920 and 1940, when local leaders developed Charleston's trademark image as "America's Most Historic City."

Eager to assert the national value of their regional cultural traditions and to situate Charleston as a bulwark against the chaos of modern America, these descendants of old-line families downplayed Confederate associations and emphasized the city's colonial and early national prominence. They created a vibrant network of individual artists, literary figures, and organizations--such as the all-white Society for the Preservation of Negro Spirituals--that nurtured architectural preservation, art, literature, and tourism while appropriating African American folk culture. In the process, they translated their selective and idiosyncratic personal, familial, and class memories into a collective identity for the city.

The Charleston this group built, Yuhl argues, presented a sanitized yet highly marketable version of the American past. Their efforts invited attention and praise from outsiders while protecting social hierarchies and preserving the political and economic power of whites. Through the example of this colorful southern city, Yuhl posits a larger critique about the use of heritage and demonstrates how something as intangible as the recalled past can be transformed into real political, economic, and social power.

Stephanie E. Yuhl is associate professor of history at the College of the Holy Cross in Worcester, Massachusetts.
For more information about Stephanie E. Yuhl, visit the Author Page.

"Help[s] unravel the complicated intentions in the cycles of creation and remembrance that have shaped Charleston across two centuries."--Journal of Architectural Historians

"A model memory study that could be duplicated in a region often focused on itself and its illustrious past."--South Carolina Historical Magazine

“Provides a real sense of Charleston’s relationship with the rest of the nation. . . . Significantly deepens our understanding of how historical memory was both created and deployed in a southern city that provided a model for similar work across the region.”--Journal of Southern History

"Anyone interested in historic preservation, cultural tourism, and the interpretation of historic sites will find A Golden Haze of Memory especially useful."--Georgia Historical Quarterly

"By explaining how the popular but distorted image of [Charleston's] history was constructed, Yuhl has constructively and eloquently reopened a discussion that previously occurred only in angry shouts and anxious whispers."--Charleston Post and Courier

"A Golden Haze of Memory . . . promises to provide an outstanding read for those interested in the creation and presentation of history, in the cultural history of the south, and in the interwar years. Yuhl's detailed and excellent account of the creation of 'Historic Charleston' offers a substantial contribution to the growing field of historical memory."--Southern Historian